Fast Casual: The Restaurant Model of the Future?

The growth of fast casual restaurants can also be partially attributed to the shift in consumer preferences and popular national diet trends. Trends such as sustainability, locally sourced products, and healthier kid’s meals are becoming more commonplace in the restaurant industry, and often align with many core principles and initiatives of popular fast casual restaurants. For example, Chipotle announced in 2014 that they would only use GMO-free ingredients, becoming the first fast casual restaurant to do so. Shake Shack is also a pioneer in this respect, designing eco-friendly restaurants out of recyclable and sustainable materials, as well as serving only vegetarian-fed, humanely raised beef in their hamburgers.

How are Other Restaurant Segments Attempting to Catch Up?

As fast food and casual dining restaurants are losing market share to fast casual restaurants, they are vying to gain customers back by attempting to appeal to millennials. McDonald's has attempted to replicate the customization aspect of fast casual by introducing a build your own burger experience, while Wendy’s has remodeled restaurants in an effort to make them more comfortable. Subway, while already embracing the customization aspect of fast casual, has added premium healthy ingredient options such as avocado and chopped salad options. Based on the core changes undergone by fast food restaurants, one can’t help but wonder if the future of the traditional fast food model is in jeopardy.

Stay tuned for a breakdown of the historical changes of the casual dining industry and where it stands today. 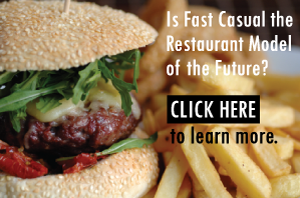