True to Name, Instant Pot Getting Hot Quickly: What the Market Research Says

For us, that device is the Instant Pot, an electric multi-cooker (don’t worry, we’ll explain later). It is the device of our current moment, existing at a nexus of contemporary trends and evolving tastes. It has taken the at-home culinary community by storm, becoming a regular countertop fixture and conversational highlight over the last five years. Even if you don’t have an Instant Pot, you know somebody who does. And they probably tell you about it. All the time.

So how did the Instant Pot build up pressure and hit critical mass? After being the ‘it’ appliance of 2017, where can it go from here?  And how many words can we write before we start bumpin’ Bowie and Mercury on repeat? Well, set the lid to seal and then wait for the whistle, we’re about to put in some serious manufacturing market research to explore the Instant Pot’s origins, future market penetration, and what this all says about trends like meal prep as well as American eating habits.

Electric pressure cookers are one of the fastest growing kitchen appliance categories in the market as sales have double and tripled over the last four years.

But, of course, the Instant Pot is more than a pressure cooker. It is actually several countertop cooking devices rolled into one. In addition to the much-exalted pressure-cooking function, the device also slow cooks, steams, and sautés. It can be used to cook rice, make yogurt, and even “bake” a (super moist) cake (trivet required).

But for all its multi-functionality, the pressure cooking capability is the star of the show—though it has many a bell and whistle, at its core, the Instant Pot is the first-to-the-party countertop electric pressure cooker. And, if you don’t know, pressure cookers are the things that kitchen dreams are made of (head here if you need a better grip on the science and practicalities of pressure cooking).

By streamlining the cooking process, the device allows for maximum results from minimal effort. Take it from your humble blogger: There is something supremely satisfying about serving a perfectly tender tri-tip, looking your astonished guests in the eye and saying, oh, I just threw this together.

And for those looking, say, to impress a frequent gentleman caller, may we recommend the mussels mariniere (ready in 3-5 minutes)? 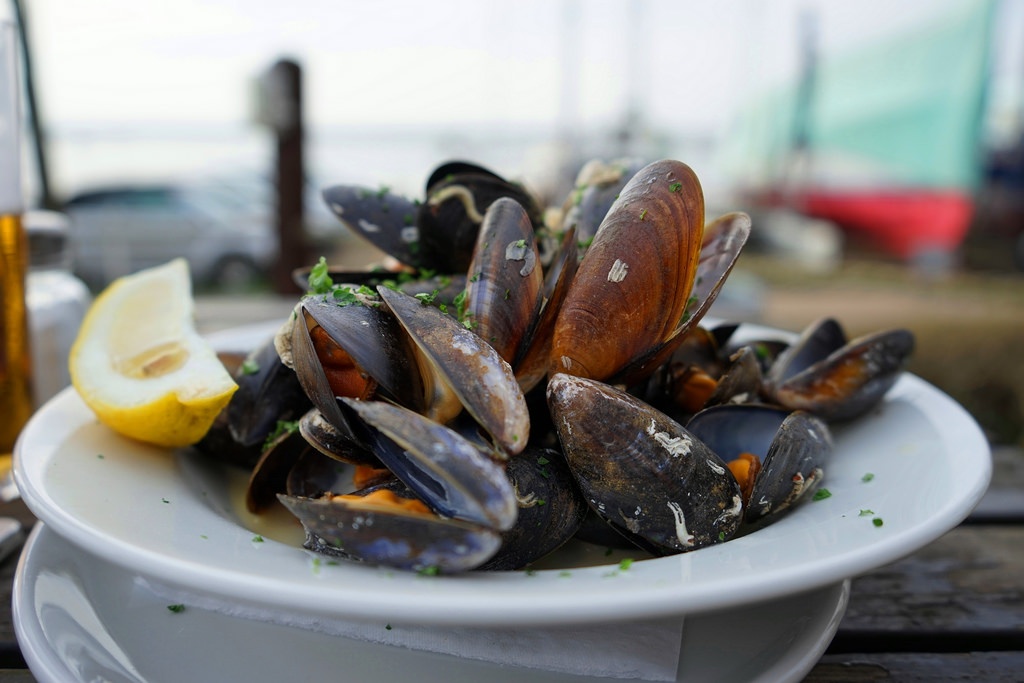 But it’s not just the time savings that have made Instant Pot golden.

First, by simplifying home-cooked, fresh meals, it is helping Americans eat better at a time when many are reevaluating how and what they eat. Indeed, stories of people losing hundreds of pounds with Instant Pot abound—the device isn’t just for home chefs, but also people looking to take healthy eating into their own hands while also juggling work, family, and life.

A means to healthier eating, the Instant Pot also allows people to save money by funneling their weekly food budget from restaurants to countertop. And because it tenderizes tough meats, consumers can buy less costly cuts.

And finally, it has landed squarely in the heart of the meal prep trend sweeping up professional millennials (your humble blogger is a meal prep master sergeant). Now, a few Sunday afternoon hours in the kitchen can result in a fridge full of work-ready lunches and healthy dinners.

These are The Days It Rains…and Also Pours (Revenue)

But don’t take it from us, take it from Melissa Clark, a blogger who has made a living providing updated recipes for the burgeoning Instant Pot market. She rather perfectly articulated the Instant Pot: “It's a thing that we all want. We’re a culture that loves gadgets, and this gadget actually really does something…It’s the perfect thing at the perfect time. Not to say that it’s perfect that it does everything well, but in terms of its popularity, it’s hitting all those things right in the middle.”

Pressure On People, People On Streets

Pressure cookers are, of course, nothing new. The manual stovetop version has been a regular feature in high-altitude and ethnic cooking for quite some time. But for every batch of Chana Masala prepared in under 30 minutes, there were also stories of explosions, splatter burns, and other kitchen calamities.

This is because, well, most people should not be trusted manipulating the laws of physics on their stovetop. When releasing pressure, inexperienced chefs often took their lives in their hands, to say nothing of leaving the cooker unattended over high heat and other potential paths to a Darwin Awards victory.

The Instant Pot has several safety features to prevent such disasters. With a pressure sensor, auto lock, and emergency shutoff functions, it would truly take a grade-A, weapons-level dunce to cause injury to themselves or others. 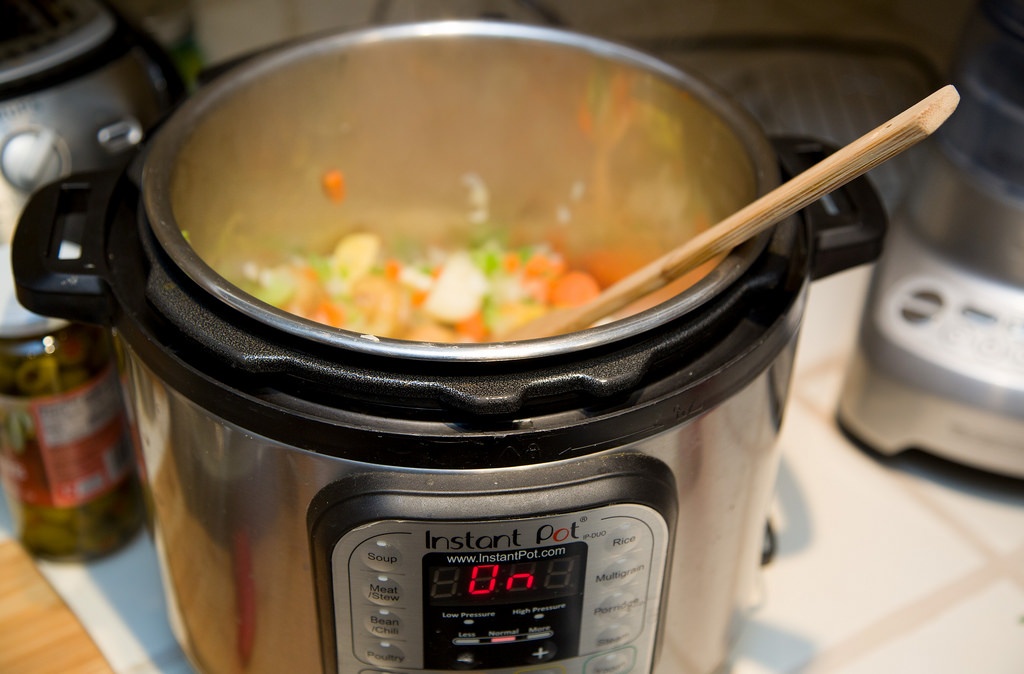 Mitigating these risks was a key differentiator in the early years of Instant Pot. Indeed, according to CEO Robert Wang, “When we started, our business plan was about disrupting the stovetop pressure cooker market.”

The Instant Pot has already surpassed this modest goal, becoming the go-to for quick at-home meals. Now they are looking to broaden their appeal by emphasizing the ways it can serve “specialty verticals”—when beans are a cornerstone of your diet, as for vegetarians and vegans, and large chunks of meat form your protein base, as in the paleo diet, the Instant Pot doesn’t just save time and money, it becomes a way of life. Or at least that’s Wang’s hope.

Pray Tomorrow Gets Me Higher

The Instant Pot Facebook community has well over 1 million followers, and this popular enthusiasm is more than coincidental, it’s the underpinning of Instant Pot’s expansion strategy. As Wang notes, “I work with Fortune 100s. All of them spend so much money in advertising. [Instant Pot has] a very grassroots approach to everything...It shows you the power of what is possible with just creating this online community.”

This groundswell of biblical devotion caught the gatekeepers of domesticity off guard—food magazines like Bon Apetit were late to the game but have now felt the pressure, promising their clamoring readers Instant Pot friendly recipes in the near future.

In the meantime, bloggers have filled in the gaps, converting braising and roasting recipes for the device and offering ethnic and diet specific dishes for some quick countertop experimentation.

And, in a move that may well symbolize the desiccation of traditional journalism, the New York Times recently offered a tarted-up version of the Reddit forum, wherein experienced Instant Pot users offered advice to neophytes. Sure, the font was prettier and the layout cleaner, but it’s just a professionalized Reddit. That the nation’s paper of record and its most popular online community are both enraptured shows the Instant Pot’s cultural reach.

Sure, we’d love them to figure out a way to integrate a broiler function. Maybe a deep frying one too? And, though we aren’t quite bourgeois enough, there is no doubt a strong sous vide contingent clamoring for Instant Pot incorporation.

Under Pressure to Grow? Turn to the Manufacturing Market Research

With an emphasis on grassroots word-of-mouth expansion, Instant Pot no doubt has already put in some serious manufacturing market research, turning to Voice-of-the-Customer methodologies to understand their differentiators and paths to purchase.

Because here’s the thing: We are nowhere near hitting peak Instant Pot. Yes, it seems like everybody already has one and also already bought one for their mother too (Mom! It doesn’t do any good in your cupboard—use it or lose it!).

That’s a lot of room to grow. Now, if you will excuse me, I have an Instant Pot to reposes from my mother.