Rising summer temperatures and a simultaneous uptick in fabulousness can only mean one thing—it’s that time of year again! Pride season is upon us. As travelers flock to parades, festivals, and some good old fashioned bar crawling across the nation, they will not only represent the rapid shifts in our nation's perception of sex and gender identities. They will also represent a whole lot of purchasing power.

From New York to Los Angeles, Montreal to Mexico City (!!!) and even Long Beach, corporations will try to make the most of this concentration of disposable income through outright sponsorships, targeted marketing, and even national advertising campaigns.

Look, America is contentious right now, so we gotta say this before we push forward: As is befitting a business blog, we are here to talk business. Obviously, a Beyoncé-channeling, Golden-Girls-referencing rag such as this is going to put its sassiest foot forward, but we are not here to talk politics, sex, or even sexuality. We're here to follow the marketing and advertising market research down to Christopher Street, through We-Ho, past Boystown, and into our very own Hillcrest as we unpack the history, context, and current state of LGBT+ marketing.

Starbucks and The Scandinavians

To our knowledge, 1994 saw the first national commercial depicting a gay couple, Ikea’s now iconic 30-second dining room table spot.  Nearly two decades before same-sex marriage gained federal sanction, the ad treated the relationship respectfully, showing the couple's pursuit of a dining room table as both a symbol of and metaphor for the relationship. Though today it may seem a bit timid and dated (those clothes!), Ikea has an air of credibility about it as it has courted gay business even when such decisions were far more dangerous.

We've come a long way since then with several milestones that bear repeating.

Who can forget Howard Schultz shoulder dusting a malcontented shareholder complaining Starbucks had lost business due to their support for gay marriage in 2013? “Not every decision is an economic decision,” Schultz replied, before continuing, “It’s a free country. You can sell your shares in Starbucks and buy shares in another company.”

From Target's long standing #TakePrideCampaign, which now boasts its own landing page replete with Golden-Girls-, rainbow-, and unicorn-themed attire, to Lucky Charms' #LuckyToBeYou campaign, corporations have come out of the post-DOMA era swinging. Since 2015, a diversity of corporations have come out with campaigns oriented around support and acceptance, including Campbell's Soup, Chevrolet, Honey Maid, Ikea, Kohl's, Maytag, Tylenol (so adorable!), and Hallmark.

Speaking of Hallmark, they only issued their first same-sex marriage cards in 2008; ten years later, they have an entire line that includes weddings (two-tuxedo realness!), births, Valentine's Day, Father's Day, Mother's Day, and just because.

Profits Before Politics (and Pride)?

To what do we owe this sudden rush of advertising? Has the cultural and social shift been so sudden and sweeping that we went from a wink-wink coded Xena license plate reference all the way to rainbow Oreos in just about twenty years?  For a community and subculture that seemed to have few-to-no friends only a few decades ago, there are now annual lists counting and even ranking the newly-minted corporate allies. 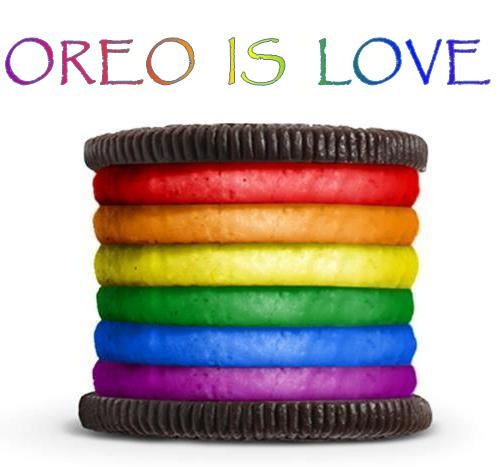 While it may seem that companies like Starbucks unabashedly put their politics before their profits, any good business blogger knows leadership rarely tolerates losses, even in the name of love. So while profit margins may at times overlap with personal conviction, we know that for every chest-thumping declaration of support, there is a bean counter in the background ensuring its viability.

Perhaps then it has something to do with the nation's youth? Consider that, according to Forbes, the vast majority (like 99%) of millennials are advertising immune, meaning they do their best to avoid it and are far likelier to distrust it. Yet it would also seem that something like 75% of them do care when brands "give something back to society."

Throw in the fact that only 65% of millennials and 48% of Gen Z identify as entirely heterosexual and you begin to understand the corporate calculus that leads many to a full- throated (and others a half-hearted) pride campaign. Politics and pride are all fine and good, but profits are king (and queen!) and pride season doesn't just represent a concentration of gay purchasing power, it also is a captivating experience many millennials, regardless of sexual identity, enjoy. Targeting ads towards the Pride playground just makes good sense.

If You are Coming to Pride, Best Come Correct (and Proud)

As with any marketing campaign, however, it isn't just about the forum, it's about the content. Companies must take care to come off as authentic, not over reaching or opportunistic, in their campaigns.

That's why Schultz's "sell your shares" comment caught on. It spoke authentically to a people who were not accustomed to being on the popular side. No, the company is not perfect (just ask those two men in Philly), but by proudly putting their money where their mouth was, Starbucks earned a certain amount of street credibility. Those unicorn frappuccinos didn’t hurt either.

Nowadays, there are websites dedicated to rating companies' authenticity and accountability. One website’s admittedly “vague” rankings assembled pride campaigns into categories ranging from “okay sure” to various shades of “good” and ultimately “greatest.” The list evaluates companies' sincerity based on their treatment of their own LGBT employees, as well as their contributions to LGBT causes with some clear winners (Levis) and losers (Puma).

This helps illustrate our broader point, that in a community and subculture where authenticity is paramount, well, you best come correct. Slapping a rainbow sticker onto your corporate logo for a week, or pushing out a vaguely supportive hash tag is likely to alienate as much as anything else.

For companies like Ben and Jerry's, whose long-standing support (1989!) of same sex marriage goes hand-in-hand with their overall granola-crunchy liberal image, and Nordstrom who extended same-sex partner benefits long before it was required or even cool (1998), it is easier to walk the walk, or Sissy that Walk (if you will).  But for others, the catwalk can be a bit bumpier.

With LGBT+ publications referring to Pride as "capitalism's sassy best friend," accusations of Pinkwashing—posturing as LBGT+-friendly to improve a corporate reputation--are leveled annually. New York City Pride pulled in $1.7 million worth of sponsorships in 2016, which, according to High Snobiety, means, "Pride is more than a march for equality: it has become a business." Obviously, some are more turned off by this than others.

Look, you have to remember what Pride used to be: A refuge for people who quite literally had no public presence, no role models (no, Liberace did not count!), no safe space, and little-to-no acceptance. For older participants, the trauma from these years is still very real and they buck against what they see as a corporatization of their space and identity.

But as Pride specifically, and sexual minority identity in general, have increasingly entered the mainstream, these trailblazers are not the only voices in the parade. For younger generations—who likely grew up with a gay uncle (or two!) and can't imagine a cultural landscape that did not already include Rupaul's Drag Race—this militancy and insulation seems dated and unnecessary.  And, again, it's those consumers marketers and advertisers are courting.

As one marketing executive observed, "Marketers have been moving for many years toward including more lesbian and gay consumers in ads, part of a trend reflecting the changing demographics of the American public."

For marketers and advertisers, the decision isn't if, but how. And "how" is a question best answered by market research methodologies. Not to borrow the language of Pride, but as we've said before, marketing agencies and market research firms are natural partners.

Put in the market research and find your tone and even your timing. Because here's the thing: LGBT+ consumers aren't only alive during the summer strut season, despite what many marketers may think.  Understand when and where your or your clients' brands makes sense in LGBT+ spaces before rolling out campaigns. In a space defined by authenticity and acceptance, the only rule is that it must be real (it's got to be real!).