Market Research Can Help Peloton Climb Even Higher, But Time Is Running Out

There was a lot to notice during this week’s inauguration, from the peaceful transition of power to Lady Gaga’s show-stopping broach, to the debut of a new national voice. And while we watched as captivated citizens, one news item made our market research ears perk up, news that President Joe Biden is locked in a struggle with the Secret Service and State Department about his exercise bike.

Yes, you read that correctly. President Biden desperately wants to bring his Peloton to the White House.

Perhaps no company so publicly and profitably ascended into popular consciousness in 2020 as Peloton, purveyors of premium at-home exercise bikes and treadmills, as well as the monthly $39 subscription to fitness classes that accompanies them. The company seeks to recreate public spin classes through tablet-equipped exercise machines, streaming live instruction to thousands of people at a time, who compete against themselves and one another.

Yet, there are some causes for concern as the clock winds down on the pandemic that galvanized their sales. The product remains out of reach for most everybody but the wealthiest consumers, and logistical issues infuriate current ones. These difficulties threaten to create a vicious cycle (pardon the pun) wherein their sales funnel constricts, and their subscriptions decline. Peloton must put in the necessary retail market research to maintain its grip on the at-home exercise market—like their users, they find themselves in a race against a faceless competition. So, today we will explore Peloton’s rise to industry dominance and the potential pitfalls market research methodologies may help them avoid. 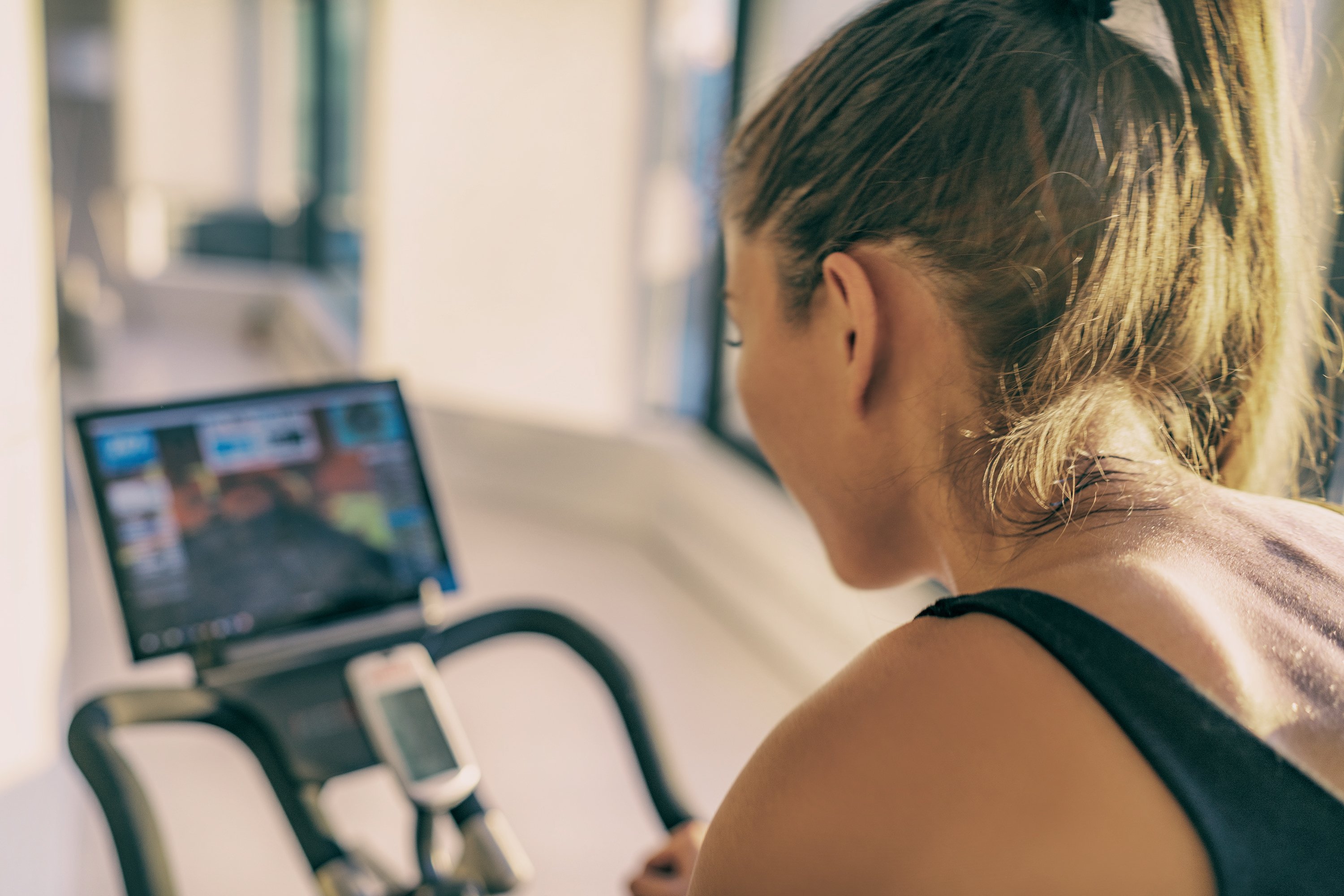 Peloton Used the Pandemic to Push Down for Speed

Exactly one year after going public, Peloton reported its first profitable quarter, in which profits nearly tripled to $89.1 million, growing from 886,100 subscribers in March 2020 to 1.1 million by the end of June. The company only expects this number to increase, forecasting it could double it by the end of 2021, logging 2.1 million active subscribers. By that time, the company projects total revenue will be around $3.5 billion.

To what can we attribute the growth? Obviously, COVID-19 has had a lot to do with it. The pandemic closed gyms and other collective exercise activities, which Peloton allows consumers to recreate from their own home with live instruction and leaderboards. From the earliest days of lockdown, social media has been flooded with devotees bragging about the feats of their feet, and Peloton has become one of the “it” products of the pandemic, which quadrupled its valuation to $40 billion.

Then there is the free advertising that Peloton gets from its famous and fabulous clientele. Michelle Obama and Usain Bolt were early adopters, and then there was the Biden story (in case you were wondering, the bike’s cameras and microphones, meant to foster a collective exercise environment, pose a security risk). It has enjoyed celebratory profiles from The Sunday Times and Forbes, and, despite the occasional public relations misfire (people are still miffed about that holiday commercial), the company seems poised to continue to clip in, get out of the saddle, and level up.

As its user base grows, Peloton hopes to trap users in its closed subscription system, essentially selling fitness as a service. And they need to do it quickly.

CEO James Foley, who started the company in February of 2018, is taking a deserved victory lap on his stationary bike.

“It has been another staggering year of growth, and I know all parts of the organization have had to work together to do everything possible to meet the incredible demand for our products and services. The strong tailwind we experienced in March as the COVID-19 pandemic took hold has continued to propel demand for our products into the fourth quarter and first couple of months of Q1 fiscal year 2021.” 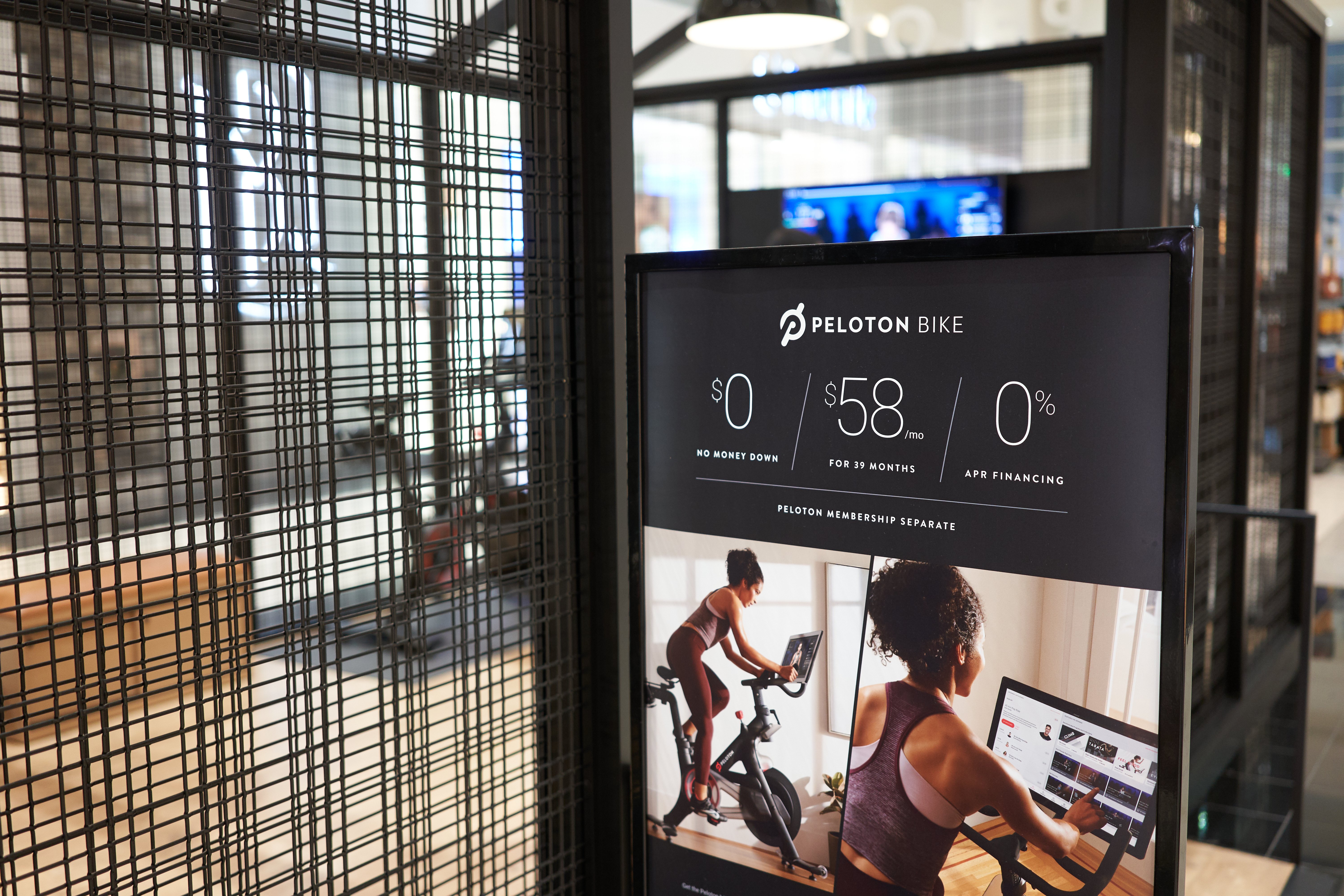 From the day it first registered in popular culture, Peloton has been the butt of many jokes deriding it as a yuppie extravagance, a new public signifier of wealth and social status among white-collar millennials and celebrities. But behind these jokes is an inescapable truth: Peloton’s products are out of reach for most consumers.

If the company’s goal is to be a premium fitness provider for the one-percenters, well, they’ve already achieved their goal. But Peloton is not only trying to sell the hardware, they also want to sell fitness as a service. Peloton users pay $39/month for live and prerecorded classes and fitness tracking. For that reason, Peloton desperately wants to get as many people into its closed subscription as possible, and they want to do it as soon as possible.

The entry cost is definitely deterring many potential subscribers. Wedbush analysts, for example, surveyed 1,200 people and found that Peloton’s sales would “dramatically improve” at a lower price point. Obviously. According to the report, 42% of non-Peloton users would be interested in more affordable products. The demand is there, just not the means.

To that end, the company recently lowered the price of its flagship stationary bike by $350 from $2,150 to $1,800, with plans for future pricing cuts. To avoid watering down their brand’s premium cache, the company will also launch a premium bicycle ($2,495) that will include better technology and synching with Apple Watch, as well as a $4,000 new treadmill with the same tech forward offerings.

The trick, of course, is maintaining interest in premium products while lowering entry costs to boost subscription rates (that’s the kind of problem market research was made for!), but before they can accomplish this, they have to get the bikes to the people ordering them. Lately, this has proven difficult. 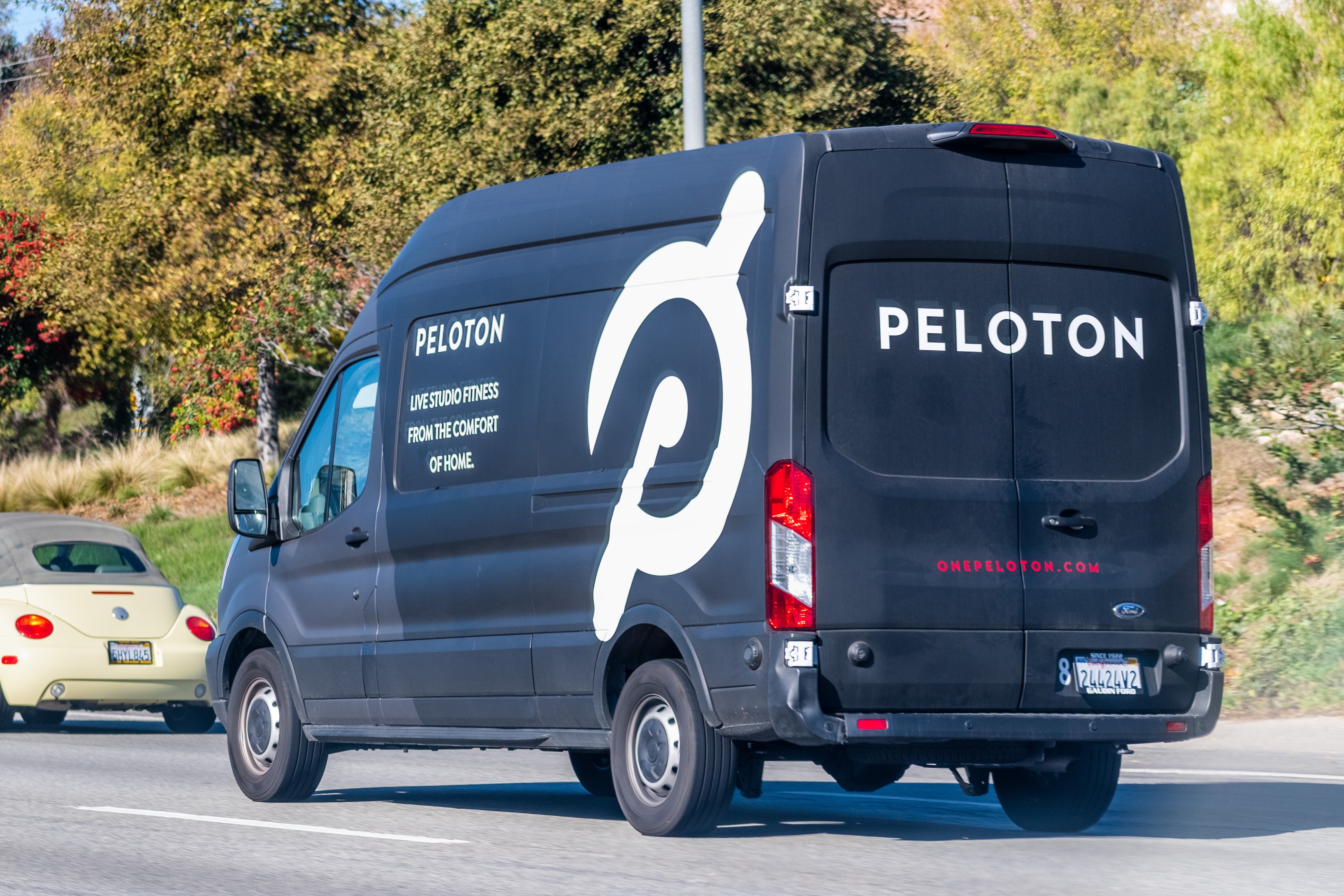 Like a recently bulked up athlete who can no longer fit into their workout clothes, Peloton has experienced some significant growing pains. To put it plainly, they have fallen wildly short of their delivery timetables, oftentimes taking months to delivery $2,000 bikes that customers have already began to make monthly payments on.

Indeed, according to one retail analyst, “What we’re finding is that Peloton ‘the idea’ has grown faster than Peloton the company. All companies need to figure out how to grow into their hype. Right now, the hype surrounding Peloton is like no other."

Reports of customers waiting months upon months for a delivery date that is constantly pushed back are becoming quite common, with many noting that Peloton’s customer service and logistics apparatuses are not up to the task.

To get an idea of how bad it’s gotten, consider that Peloton’s users are, by and large, fanatically devoted evangelists for the brand, filling its Instagram page with affirmation and appreciation. Yet, despite this adoration, the company currently has an abysmal 1.4 out of 5 stars on the , which has logged over 800 complaints in the last twelve months.

Their Instagram page, formerly an echo chamber of effusive praise, has become a backwater of disgruntled customer complaints. Responding to a company post about New Year’s exercise goals, one customer wrote, “I know a good Peloton goal…deliver my mom’s bike that was supposed to be here December 21st!” When a customer celebrated hitting their Peloton ride, another replied, “I could be close to 900 rides oh but that’s right I don’t have my bike!”

Even more galling for customers who have been waiting for delivery since the fall, and in some cases since the summer, is the fact that Peloton continues to promote and sell its equipment despite not yet fulfilling back orders. Even if it makes logistical sense for the company to continue with orders to gobble up market share, the customer relations and marketing goals must align. And as any cursory advertising market research would tell you, right now it looks like Peloton is more interested in future customers than current ones. 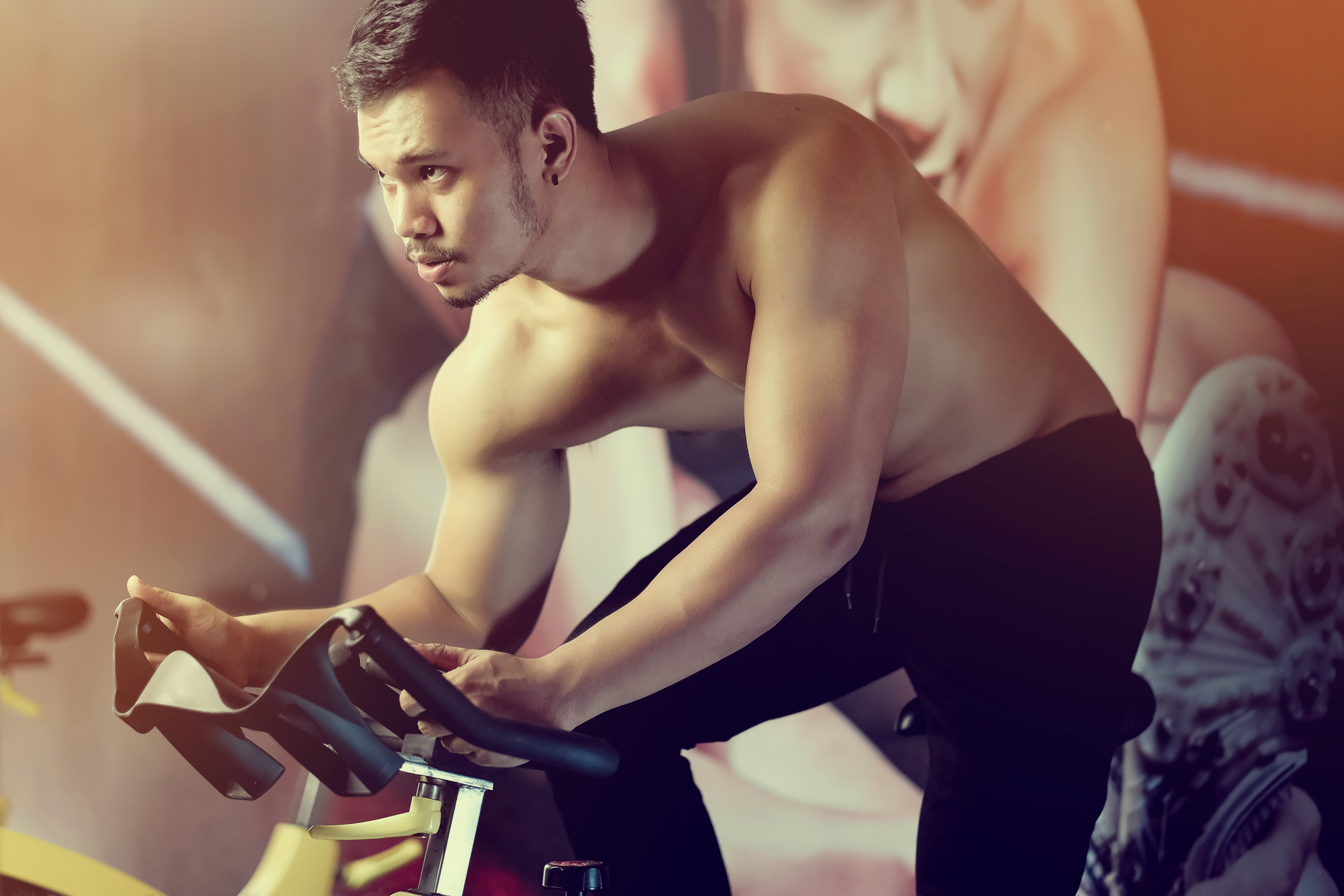 By Thanksgiving, Peloton began to change course, not offering its typical Black Friday promotions, obviously hoping to relieve some pressure on its supply chain. And the company’s ever-cheerful CEO had to sound a consolatory note, offering free digital classes to those still awaiting delivery. “It pains us that we have fallen short,” said Foley. “We can and will do better.”

Part of doing better, obviously, is increasing production capacity, something that can’t just happen overnight—Peloton’s ascension was so quick that they need time to catch up, a good problem to have, sure, but a problem nonetheless.

In the meantime, the company has started moving its bikes by plane instead of boat, hoping to avoid ports that have grown more congested during the pandemic. This represents a significant cost increase for the company, but it is a necessary step to address a growing consumer rebellion. Peloton also acquired Precor, a fitness equipment manufacturer in the United States, allowing the company to begin domestic production in the second half of 2021.

Here’s the thing: Peloton needs its customers to clip in quickly and forever, because the competition is coming from nearly every direction. Premium gyms like Equinox and Planet Fitness, as well as Apple Fitness+, have started selling remote subscriptions similar to Peloton’s core offering. Meanwhile equipment manufacturers like NordicTrack and Echelon Fitness are targeting consumers for whom Peloton’s pricing is prohibitive.

Even Lululemon is coming for them after acquiring Peloton’s rival, Mirror, for $500 million, looking to bring their devoted customer base into the at-home fitness subscription market.

But all of these competitors pale in comparison to Peloton’s true threat, the eventual reopening of the nation’s gyms, fitness studios, and personal training facilities. As we described in a previous market research blog, consumers are reshaping their fitness habits in the face of lockdowns, and Peloton is doing its darndest to ensure that people are closed into its system before gyms reopen. Because if you bought a $2,000 bike, you are going to want to use it—pandemic or not. But if you were on the cusp of purchase and gyms suddenly reopened, the imperative is gone. Delivery delays and prohibitive entry costs are a market research problem that must be solved quickly.

Sure, people like Michelle Obama are never going to be able to work out in a gym, pandemic or not, but, while bountiful in every imaginable sense, the former first lady is not enough to sustain Peloton. And neither is Joe Biden, who, at the time of publication, seems likely to prevail in his bid to bring his bike. That kind of PR can be huge for a company facing the biggest challenges in its brief history, but they have to play it right because they do not want to come off as elitist or out of reach. Thankfully, there’s market research for that too!