You don’t need a business blog to tell you that fast casual is big (we know: you come for the business but stay for the fun).

With lower overhead than dine-in restaurants and a fresher, less industrial factory vibe than QSRs, they have been the thing that food dreams are made of ever since Chipotle went from 16 Colorado stores to national dominance in a little under five years.

But with the better burger, better pizza, and even burrito markets growing both saturated and stale, to say nothing of frozen yogurt and cupcakes, it is time to wonder from where the next big fast casual concepts can emerge.

And as we consider what unites what we believe to be the next wave of fast casual, everything comes up ethnic. From poke to gyro (yes, we will be talking about Halal Guys, and, no, we do not know what they put in their white sauce) all the way to Indian burritos and Korean fries, it is apparent that consumers today want something authentically unfamiliar…but not alienating.

So, follow the zig-zagging line and please have your order ready by the time you get to the counter (seriously, what gives, people?!) because we are dishing up some elevated food service market research to understand fast casual’s current and future trajectory, the rise of niche ethnic concepts, and the conflicts and compromises characterizing local establishment’s rise to the mainstream.

These days, good food will only take you so far—there is no definitive baseline of deliciousness a restaurant can surpass and then succeed. There are plenty of local and regional fast casual joints that will never make it big (oh, dearest Holé Molé, you deserve the big time…if you want it!).

Partnering with an established franchising firm is often the first step so it’s worth exploring what, these days, is catching their eye.

Fransmart, a leading franchiser, invests in such local and regional concepts. Their founder and CEO Dan Rowe explains that, for him, a brand “has to have its own soul and its own story.”

Rowe isn’t interested in franchising imitators, also rans, or runners up: “When someone comes up with a good idea, a whole bunch of other people inevitably jump into the pool. We don't want the other people who are jumping into the pool, we want the people who have the authentic DNA that connected with people in the first place.”

And there is plenty of reason to believe Dan gets all his ducks in a Rowe. Fransmart is credited with taking better burger joint 5-Guys from its humble five-location Virginia roots to its current, massively successful, 1,000+ storefront status (and, for the record, this humble blogger’s burger-chain burger of choice).

But whereas previous booming epochs of “better-than” fast casual trends revolved around burgers and pizza, Rowe believes ethnic food concepts are primed for the next big boom, particularly Middle Eastern and Indian. We agree with his assessment, though we would also add South Asian (more on that later) and vegan/vegetarian (which we’ve already said plenty about).

A Quick Explanation of Fast Casual

Before we get too deep in, let’s take a step back and ask, what makes fast casual fare? What’s fast food, what’s casual dining, and what’s fast casual?

Let’s break this down to make sure there isn’t any (ok: not quite so much) confusion. There is no one standard by which a place is declared fast casual—the lines between QSR, fast casual, and casual dine-in have all been blurred with omnichannel advents and our increasingly on-the-go culture. But there are some clear components at play here.

The truly successful fast casual joints find one niche segment and attack it. They build out entire menus from a few core ingredients that can be plugged into several different menu items, and an array of add-ons and extras that allow each customer a degree of individuation.

Consider Chipotle, which despite some pretty regular food-poisoning induced hiccups, remains fast casual par excellence. Their holy trinity of core proteins—chicken, beef, and pork—can be the foundation of their taco, burrito, and bowl offerings. There’s only one type of chicken, but it can go in wildly different directions depending on how it is accessorized in the customer’s hands.

Now consider Pei Wei, a downstream PF Chang that certainly includes counter ordering but lacks the streamlined, minimalist menu that Chipotle and the like can boast. Pei Wei is not the type of fast casual we are talking about.

Neither then is an older generation of relatively tamer, less in-your-face novel, places like Flame Broiler (boasting 200 rice-bowl-serving locations) and Noodle and Company (460 pan-ethnic noodle-serving spots). These are not the types of places that serve the unfamiliar or the unabashedly ethnic and consequently enjoy a more middle-of-the-road fanfare.

Halal Guys had a Permissible Concept 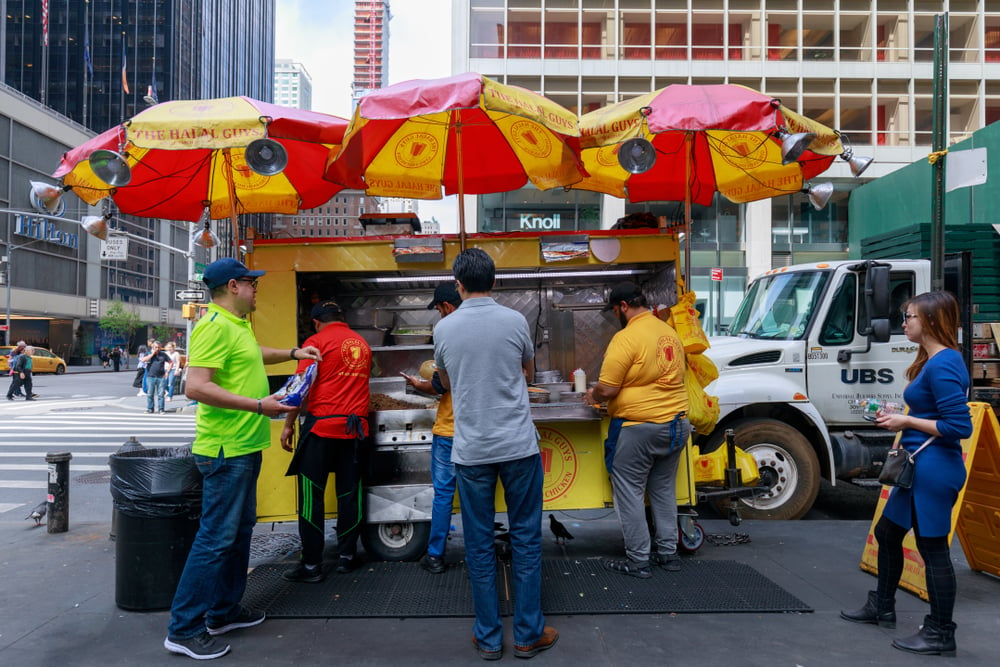 So, yeah, let’s talk about The Halal Guys. Have you heard of them? Have you eaten there yet? You will.

Serving gyro style shaved meat in both sandwiches and bowls, their food is entirely in accordance with Muslim dietary law (Halal literally means ‘permissible’), but slowly started to gain traction in secular circles.

Indeed, word had spread: their meat was so smoky and juicy, their rice so tasty, their white sauce so playful and creamy, and their hot sauce…well, yeah, their hot sauce. Let’s just say that when they say hot, they truly mean it. It’s the kind that burns on the way in and out.

But with lines that often extended around the block, going as many as thirty people deep, it became apparent that their time for expansion was nigh.

Partnering with FranSmart, there are currently 69 locations nationwide, with an additional 400 (!) currently in development. And in terms of national competition, well, we can’t think of any other national food chain offering gyros except for Arby’s. So yeah, they’ve got some open road ahead.

Their combination of novelty and familiarity is one reason why they are already the second largest ethnic fast casual brand behind only Chipotle, which, again, is Mexican food we guess though they seem to go out of their way to jeopardize their Mexican credentials.

That said, don’t lose sleep worrying for Chipotle. Every time an emerging ethnic fast casual concept gains traction, it is immediately dubbed “the Chipotle of _____” as in Halal Guys is the Chipotle of Middle Eastern.

Of Authenticity, Intimidation, and Essentialism

Ethnic fast causal concepts must battle consumers’ unfamiliarity and intimidation when pushing into the mainstream—there’s always a certain contingent excited to try the newest thing that nobody else has tried (they’re called hipsters) but, by and large, in order to enjoy crossover appeal there has to be some compromise.

Though Rowe says he wants his potential investments to be “uncompromising,” a certain amount of compromise is always necessary when trying to break into the mainstream (just ask Snoop Dogg or Eddie Murphy).

Consider Curry Up Now, which has built itself up to six storefronts and one food truck, encircling the San Francisco Bay on the strength of its Indian fast casual cuisine.

Yes, it’s standard American Indian fare, with Chicken Tikka Masala their crown jewel…but there’s something different about Curry Up Now. While the owners hate the word “fusion” there is no way around the way they are packaging and selling their Indian food: in burritos, tacos, and quesadillas, and on top of French fries.

Yup, there is something distinctly American-Mexican about their menu, and, according to the founder, this isn’t as much about the food as it is about marketing approachability: "The burrito is 100 percent Indian, but by calling it a burrito and offering it as a burrito, we've made the food accessible to all," Kapoor said. "Everyone knows what a burrito is, but not everyone knows what a kati roll or a thali is."

We can save conversations about semantics and ethnic essentialism for another day, but, suffice to say, Curry Up Now is trying to ride that oh-so-profitable middle ground at the intersection of accessibility and authenticity.

That could explain why Tava Indian Kitchen, another Indian fast casual up and comer, became Tava Kitchen when it expanded from its Palo Alto origins—to some, Indian still means curry and curry still means too-spicy-for-me-because-even-onions-burn-my-mouth. Their CEO says it’s not as much about the food itself as the perception customers have of it

There is also Chi’lantro, an Austin-based Korean fast casual spot that features kimchi fries, and LA-based Bibibop grill serving Korean-inspired proteins over purple rice, noodles, or in a wrap (yes, this is just another word for burrito).

Combining the familiar with the unfamiliar seems to be a winning recipe but finding that balance can be tricky.

And that, of course, is where food service market research comes in. Multiple voice-of-the-customer (VoC) methodologies, particularly customer intercepts and dine alongs, would help an up and comer see just how far they can go with their current offerings.