People have been mixing Coke into their cocktails since time immemorial, from the familiar Jack and Capitan combinations to the less famous Kalimotxo. But never before has Coca-Cola gone ahead and poured the booze in for you, but all that is about to change with their recent announcement that they bravely are entering the Japanese “alcopop” market. Indeed, the beverage giant is going to start producing what is known as “chu-hi” in Japan—a canned mixture of grain alcohol and sparkling water.

The move is interesting, not just for the ways in which it reminds us to always consider regional distinctions when formulating products, but also because, whether they would like to admit it or not, Coke knows they must continue to diversify or die. So they will boldly experiment in cultural labs around the world, and particularly in Japan, as they try to remain relevant in an era in which their flagship product is seemingly flying at half-mast.

This move technically does not mark Coca-Cola’s first foray into alcoholic beverages (or mind-altering drugs in general, for that matter). The company bought its way into the California wine industry in the 1970s, serving canned wine on airplanes (hey, they were ahead of their time) before cutting bait and selling in 1983.

But what they propose to sell in Japan is clearly different and though it may be a first for the Coca-Cola franchise, they will by no means be the first or only player in the chu-hi market, which is already quite crowded by over 100 flavors from homegrown beverage titans like Kirin and Suntory. That’s because chu-hi is one of the most popular drinks in the country, combining what some call Japan’s national spirit, shochu, with seemingly endless flavors of sparkling water.

Women seem to really dig the stuff, which they find more appealing than beer and other unflavored beverages and, with an alcohol content ranging from 3% all the way to 25%, consumers can choose just how tipsy they will get with their favorite brand and flavor.

So, in a cornucopia of bubbly boozy flavors ranging from wild basil to yogurt to things you’ve never even heard of, where can Coke fit?

One obvious answer is to go to its cola roots and trot out a Coke flavored beverage, but thus far Coke has been mum on the subject. They certainly have much experience in concocting flavors to suit any palate (somebody out there MUST like the new Diet Coke flavors, we just have to find him), and the actual formulation seems like a no-brainer for the undisputed king of beverages.

What they Call Innovation and Experimentation is Mostly Market Research

Nonetheless, it is difficult to remain competitive in the Japanese market, according to the company’s press release, which noted a history and future of FDR-esque bold and persistent experimentation, “The Japanese market is incredibly dynamic, fiercely competitive and rooted in innovation. Because of this, our team is constantly looking at ways to experiment—both from a product standpoint and finding new ways to do business with our customers.”

These bold experiments (Coke releases roughly 100 new products every year in the country) include things that you have likely never heard of but have become regular parts of Japan’s beveragescape. They include Coca-Cola Plus, a fiber-rich version of the soda intended to encourage weight loss, and non-cola items like Sokenbicha blended teas, Aquarius sports drinks, and Georgia Coffee, all Japanese brands under the Coca-Cola banner earning over $1 billion/year globally.

And these products aren’t solely in Japan any longer, but have expanded out into the broader Asian market. 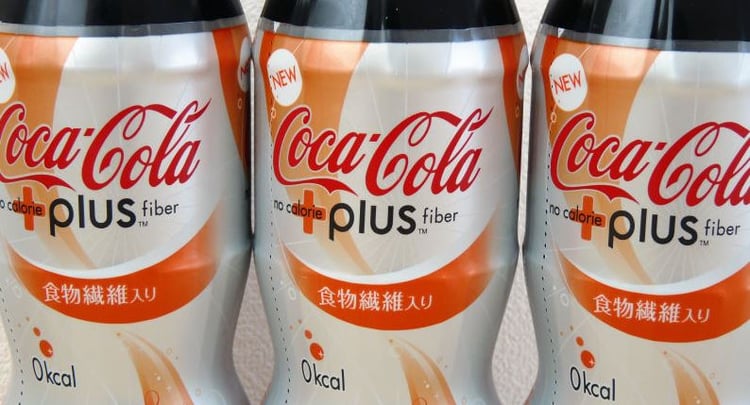 Coming Soon to A Coke Can Near You?

But there is something else they aren’t discussing too much: whether this is a Japanese- or Asia-specific product, or if we can expect something similar domestically.

Hedging their bets, Coke seems to be saying this isn’t a likely candidate for a US crossover, but not to count it out either. Their press release played the bad cop, noting: “The Chu-Hi category is found almost exclusively in Japan. Globally, it’s not uncommon for non-alcoholic beverages to be sold in the same system as alcoholic beverages. It makes sense to give this a try in our market…But people around the world should [not] expect to see this kind of thing from Coca-Cola.”

Why the hesitation? Well, first, they aren’t going to make any promises one way or the other until they put in the market research. Coke notoriously goes through exhaustive rounds of qualitative and quantitative testing (though sometimes with more success than others) and they no doubt want to see how the product performs before making any further decisions. Sounds like Focus Groups, Panel Surveys, and quantitative in-field data collection.

Also, however, with the sudden surge of canned cocktails (more to come on that next week!) Coke has to be considering its options when it comes to product diversification.

What the Beverage Industry Market Research Is Telling Coke

As we learn more about sugar’s deleterious effects, products that rely on it as a base ingredient are increasingly at risk of becoming passé. Scientists and consumers are figuring out that, while it is a fat-free food, sugar nonetheless changes the body’s outward appearance and internal functioning. FDA moves to relabel products to ensure customers understand the amount of “added sugars” in their foods  are just one small step in the larger process of getting the US off its century-long sugar high.

Thus, Coca-Cola knows, and has long known, that their mainstay product is on the descent. This doesn’t mean the Classic airplane is crash landing, free-falling from the sky, just that it probably reached its peak a decade ago and will continue to decline steadily as younger generations form more moderate relationships with Coke’s bread and butter ingredient.

And when the nostalgia and familiarity driving Coke’s continued relevance starts to become flat, innovation is key.

And innovation’s best friend, acquisition, has also been invited; indeed on this side of the Pacific, Coke recently acquired Mexican mineral water producer Topo Chico to compliment their existing battery of non-cola offerings domestically.

As we pointed out in our 2017 Beverage Industry Report, Coke knows good and well that it needs to diversity, and it has been doing so for years. Remember when they didn’t own their own bottled water brand? Or sports drink? Or juice? Unfortunately for them, only their bottled and sparkling waters are sweetener free, and as people reject sugar and its substitutes (it’s a La Croix world) Coke needs new directions.

Since we are unlikely to return to the days of Cocaine in your Coke, booze seems as reasonable a direction as any.