Adult smokers looking to quit, and much more problematically high school teenagers looking to both fit in and stand out, have really taken to the JUUL. Described as the “i-Phone of e-cigarettes”, the oh-so-small electronic cigarette debuted in 2015 and today is selling about 20 million products per month. Coming in fun flavors like crème brule, cool mint, mango, and mixed fruit, the device—which closely resembles a USB stick—is actually two separate pieces, a rechargeable battery and disposable nicotine cartridges (JUUL packs). The battery costs about $35, the cartridges about $16 per four pack.

In the last year alone, the JUUL’s parent company, Pax Labs (makers of the premium marijuana vaping device), has generated $224 million in retail sales, with year-over-year sales increasing 621% over that time. In that year, it also managed to capture 32% of the e-cigarette market, swooping in and swooping up market share from more established competitors. As of last count, it was sold in 12,000 US retail locations, as well as online.

But with all this growth comes concerns about underage vaping, about federal regulation, and about scalability. So plug in, charge it up, and vape ‘em if you got ‘em as we dig through the manufacturer market research and suggest that what JUUL really needs is a strategic consultant in the room.

While the form is simple and cool, JUUL’s biggest invention has been concentration. Particularly for adults who have found that e-cigarettes lack the punch and heft of traditional cigarettes, the JUUL can be a revelation. The science behind it is somewhat complex, but basically other e-cigarettes “freebase” nicotine in a liquid solution, but this is not how nicotine occurs, naturally or in cigarettes. Instead, it wants to bind to salts and acids found in plant leaves.

In developing nicotine salts that produce a more concentrated vapor than previous generations of freebase e-cigarettes, the product is more closely aligned with the experience of actually dragging a cigarette. Words like “altitude” and “mouthfeel” litter users’ enthusiastic descriptions of the product. It seems that lifelong smokers have been able to transition to e-cigarettes thanks to the JUUL, claiming it actually fills the void as opposed to being a stopgap between cigarettes like the first generation “freebase” sticks.

Adults looking to leave behind a comparatively less healthy lifestyle by abandoning BIC lighters for USB chargers find dosing easy: each cartridge, the company claims, is roughly equivalent to one pack of cigarettes (yes, they fit that much nicotine in a cartridge the size of a thumbnail).

According to JUUL this, right here, is the company’s raison d’etre, the distinction between drug pusher and champion of public health. It is not in the drug dealing business, it is in the business of saving adult lives from lung cancer, heart disease, and cigarettes’ other outcomes. And it’s a distinction they push rather aggressively: “JUUL Labs’ mission,” the company states, “is to eliminate cigarette smoking by offering existing adult smokers a true alternative to combustible cigarettes.  JUUL is not intended for anyone else.”

Of course, anybody paying attention to parenting blogs or hanging out with high school students knows who that “anyone else” is—underage gray market consumers who encounter nicotine for the first time through a JUUL device, use it clandestinely at school, and are its enthusiastic social media diplomats.

But What About the Children?

Whether by design or accident, JUULs have taken off at schools, becoming an iconic fashion accessory as much as a nicotine delivery device. Critics have been quick to note that the product’s clandestine nature—it looks like a USB stick for crying out loud—combined with its fruity sweet flavors certainly seem to have teenagers, as opposed to grizzled, mustache-stained cigarette junkies, in mind. 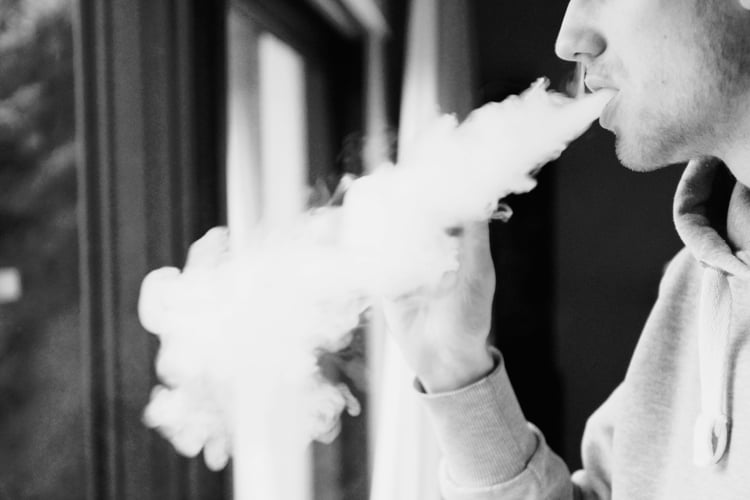 One school principal claims to be confiscating at least two JUULs per week, noting, “It has a cool factor, kids are attracted to it. It’s very easy to conceal, it’s affordable, and in terms of smell it doesn’t’ give much of a smell so parents can’t detect it.”

Indeed, reports of children brazenly charging the device in their school-provided laptop and actually vaping in class have made it to parenting blogs across the internet

This is a sticky spot for the company—they know exactly how much they are making from underage smokers and it must hurt to threaten that cash stream. Of course they are aware their flagship product is the preferred choice of underage nicotine fiends, and at least publicly it is trying to get ahead of any impending PR crisis or, God forbid, government regulation or intervention. “We do not want teens using the JUUL. This is a product designed for adult smokers to switch from cigarettes,” the company offered. “And we are trying our hardest to implement young prevention programs.”

Those prevention programs, JUUL Labs hopes, will thwart potential federal action, as threatened by New York Senator Charles Schumer who claimed the popularity of “gadgets like JUUL, which can fool teachers and be brought to school, demands the FDA smoke out dangerous e-cigs and their mystery chemicals before more New York kids get hooked.” Ending up on the wrong side of federal regulations can kill any buzz and destroy any profit margin, so look for JUUL to lean into its image as anti-cancer stalwart and shy away from its title as the preferred device of underage nicotine users.

This is Not a Cigarette (ceci n'est pas une pipe)

As a nicotine product that doesn’t get set on fire, e-cigarettes are carbon-monoxide free and carry a far lower carcinogenic load, but this doesn’t mean they come without social and corporal health concerns.

First, there is the question of what else is being inhaled—one cannot just snap their finger and convert a tobacco plant into a vaporizable oil, some kind of science and unpronounceable chemicals are certainly involved.

And then there is the question of children and nicotine. Indeed, parenting blogs are sounding the alarm, encouraging parents to remain vigilant and even offering a list of warning signs that a high schooler has taken to vapin’ (keep an eye out for cottonmouth, apparently). And this isn’t just fear mongering for the sake of fear mongering. Studies reveal that youths (remember: that’s what high school students are—youths) who vape are likelier to smoke combustible cigarettes later in life, and also that early exposure to nicotine can lead to brain development issues researchers are just beginning to understand.

Yet, despite the handwringing, JUUL’s creator does seemingly grin like a cat with a canary in its mouth. It is important to keep a brave public face and to discourage underage product abuse. But they have to know, somewhere in their heart of hearts, that what is bad for youth’s hearts (and brains) is good for their bottom line. Buzzfeed summarized the paradox rather nicely, “While e-cigarettes might help adults quit smoking, they can also hook young nonsmokers on nicotine.”

And evidence suggests they already have. Vaping is already more popular than traditional cigarettes among underage smokers (though a distant second to marijuana), and JUUL is the undisputed king of the campus.

But all that success, much like a greedy pull from an e-cigarette, can be too much too quickly and consequently make it difficult to stay upright. In addition to mounting public pressure to account for their presence in high school halls across the country, JUUL has also found it difficult to keep up with production demands while maintaining a quality product. In short, they may have grown too quickly and without a plan.

Complaints of defective, short-lived, and otherwise unsatisfactory products have poured in over the last year, leaving the company to suspend its expansion aspirations in order to focus on the basics. It has recently ramped up production again, but not without manufacturing and public relations hiccups.

Look, developing a scaled growth or transformation plan can be incredibly complicated, requiring the commitment and mutual understanding among many siloed divisions, often with competing needs.  And that’s with a normal company, not one caught between the medical and gray market where different departments have truly oppositional needs.

That’s why you need a professional in the room—sometimes the market research isn’t enough, you need a partner throughout the process. TrendSource Strategic Consulting is not just there to arbitrate disputes between marketing, insights, and development, but to help develop a road map all departments can buy into. What are the advantages of unbridled growth and how can they be balanced against operational and marketing concerns moving forward? What is the relative cost of unfavorable word of mouth, and how to balance that against sales goals? And, ultimately, what is the path to market expansion and retention?

These are all questions JUUL is no doubt asking. Let’s hope for their sake they have some consultants in the room.