Plant Power, a vegan fast food restaurant with a vaguely political name, believes it is on the forefront of a movement that will reshape the American Diet, culture, and, most importantly for the purposes of this market research blog, fast food. The restaurant, complete with “sonic style” drive up, moves and shakes like any typical fast food joint with one glaring exception: everything (yes, EVERYTHING) they serve is entirely (yes, ENTIRELY) plant-based.

And though such niche eateries are nothing new, particularly within a stone’s throw from a liberal arts campus or arts community, there is something different about this current plant-based moment: it’s not just for the vegans anymore. Indeed, according to one of the chain’s founders, the vast majority of customers are “omnivores who want to try something new.”

And that should scare legacy fast food joints. A lot.

Established in January 2016, Plant Power operates like a typical fast food spot—they’ve even found it convenient to move into abandoned fast food spaces such as the former Encinitas Burger King that recently became their second San Diego-area restaurant.

Their first location in Ocean Beach did $1.1 million in business last yearand is on track to hit $1.8 million this year. Their Encinitas location—which boasts more space in a tonier community—is on pace to do $2.2 million in its first year. And now they are looking to expand.

First order of business: they are establishing a commissary to centralize and streamline production and delivery within the southern California market. This will help with their plans to expand into Orange, Los Angeles, and Riverside Counties, with the goal of opening 3 restaurants in the next six months. Embracing a franchise model, they hope to expand out of state and ultimately blanket the nation in plant power.

Their ambitions seem lofty, sure, but the groundwork has already been laid and it seems we are on the cusp of a plant-based food boom.

The Changing Faces of Meatlessness

Indeed, this is part of a broader trend marrying vegetarian and vegan diets with the convenience and creativity of fast casual and fast food restaurants. Already the Veggie Grill is a bonafide West Coast success story, and the East Coast’s by CHLOE. is seeing equally inspired gains.

Look, we all have a preconceived notion of what the crowds at—pardon the expression—granola shops look like (Old joke: in a room full of people, how can you tell which one is a vegan? Answer: He’s the one telling everybody he’s vegan.). Point is, we imagine hippies, kooks, and proselytizers—consumers who want a heaping spoonful of self-righteousness with their seitan. But that image of the typical vegan food patron is less and less operable these days, and keeps us from seeing how quickly and broadly this trend is taking off.

Whereas few Americans (estimated at around .5%) live the dedicated vegan life free of animal products, more and more are limiting their animal intake: In 2015, 25% of Americans reported they reduced their meat consumption.

These are not the “vege-terrorists” rocking “Meat is Murder” bumper stickers, but rather typical Americans who, for financial, environmental, and even moral reasons, are choosing to limit their meat intake. Indeed, eating less meat has become increasingly normalized: Meatless Mondays actually are a thing, family barbeques seem to have at least one vegetarian option these days, and the days of eating meat with every meal seem a remnant of a different era.

Juxtaposing this tempered omnivore against whatever weekly disturbance PETA has contrived really emphasizes how diverse this market has become. There is a new face of meatlessness, and it is less fanatical but no less hungry. And the people at Plant Power want to feed that face.

The thing is, so too should the people at McDonalds, Burger King, Wendys, and all the rest. 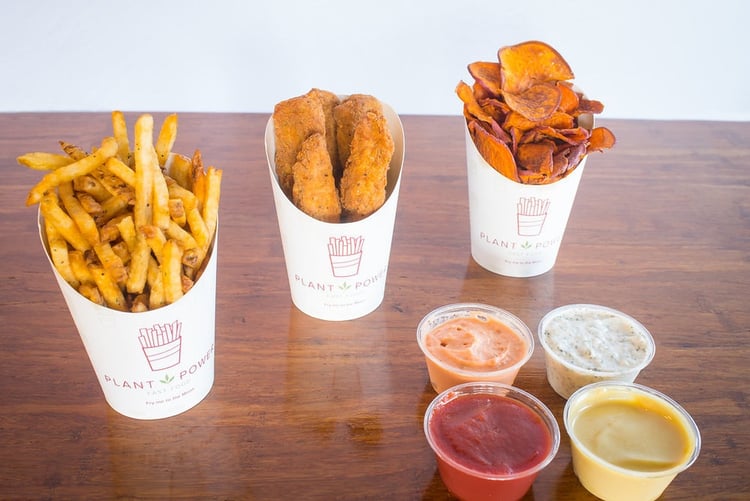 As we discussed last year, mainstream fast food chains have long struggled to include desirable vegetarian and vegan products, citing cost and consumer indifference. But, with the recent successes of alternative fast food establishments, the time may finally be right. Perhaps McDonald’s recent decision to test vegan burgers in Finald is the vegan canary in the coal mine, signaling to others it’s time to get cooking.

Guarding his territory from legacy entrants, Plant Power co-founder Jeffrey Harris offered the chains some free wisdom: “It may be challenging for mature brands to gradually pivot towards plant-based model in a way that doesn’t alienate their existing customer base.”

What would this gradual pivot look like and how, despite Harris’s discouragement, might chains begin the process?

First, let’s be clear: we’re not talking about turning Burger King into Veggie Burger King, we’re talking about adapting the menu to give different diets equally enticing options. This is a tightrope walk Taco Bell has long ago perfected—they are simultaneously a fast food refuge for vegans and vegetarians, and also the purveyor of stoned out, crazy meat products like a taco shell made entirely out of a fried chicken breast. Omnivores, vegetarians, and vegans eat in harmony without anybody feeling bad about what’s on their plate

Fostering such an environment isn’t about subtraction, it’s about addition. No need to take meat items off the menu, just round it out instead (though perhaps it’s already time to retire Jack in the Box’s meaty monstrosity, the Brisket Burger?).

Easier said than done, right? How to entice new customers while not alienating the old ones and making them feel, well, old and outdated by debuting shiny new, healthy, and trendy menu items?  It’s not an easy balance to strike, something poor Applebees learned the hard way. With so much at stake, this is clearly a problem that requires some market research.

Customer intercepts are an important start. Before thinking about expanding your customer base, you must ensure you maintain your existing one. Use customer intercepts to figure out if and how you are meeting your current customers’ needs and preferences, to solicit early ideas for what a menu expansion would even look like, and to ensure that you maintain that je ne sais quoi that keeps them coming back.

Consumer panel surveys should be the next stop. Assembling a market research panel survey will allow you penetrating insight into different demographics and markets, and tell you how to go about enticing consumers not already in your stores. And finally focus groups are an ideal way to test out new menu items and combinations to ensure they strike that harmonious balance. Just remember, doing the market research is only half the battle—you have to understand it and implement it as well.

Don’t worry about being first; put in the market research to ensure that you are not last.