Juneteenth Finally Is Having Its Moment in the Spotlight; Corporations are Noticing

This Saturday is Juneteenth, a holiday celebrated in African American communities for over 150 years that has flown under the popular (white) cultural radar since its inception. But that has changed over the last two years as Black Lives Matter protests gained momentum and sparked interest from allies and attention from corporations.

And as of a few minutes ago, it is now a national holiday, with Biden signing the bill into law only days after it passed both houses with near unanimous support.

What has led the sudden attention to this holiday from formerly uninterested groups? For businesses, what are the promises and pitfalls of jumping on the Juneteenth bandwagon?

Today we are going to put in some historical research and some market research to contextualize the holiday’s history and historical meaning, its current cultural significance, and the ways that companies have begun to engage it. Juneteenth, a portmanteau of June and nineteenth, commemorates the day in 1865 that Major General Gordon Granger announced in Galveston, Texas that US slavery had ended per Lincoln’s 1863 Emancipation Proclamation. Yes, the Proclamation happened over two years before Juneteenth, but it wasn’t until Granger and 2,000 Union troops arrived in Galveston that it was announced as law.

It is important to note that it wasn’t until six months later with the 13th Amendment to the US Constitution slavery was officially and completely outlawed in the United States. The 250,000 people celebrating the first Juneteenth weren’t truly liberated, but on that day they newly and truly believed in the potential for liberation.

Juneteenth, then, does not commemorate the day freedom came but rather a continued hope for its eventual arrival. This wasn’t about finally reaching the promised land; it was about a persistent belief in its existence.

Since then, the holiday has remained a focal point in Black communities across the country. Way back in 1872, a group of Black ministers and professionals in Houston purchased ten acres of land to create Emancipation Park, explicitly to host the city’s annual Juneteenth festivities, which it does to this day.

Today, across the country but particularly in the south, there are festivals and parades (complete with a Miss Juneteenth), cookouts, house parties, and church events all built around commemorating the holiday.

The Rise of Juneteenth in National and Corporate Conversations

Yet, while Juneteenth has been celebrated for over 150 years, it does feel like it has only recently enjoyed its first moments in the popular culture spotlight.

This last year of racial violence and protest deepened the holiday’s significance among Black celebrants, according to Mark Anthony Neal, Professor at Duke University. Neal believes there are significant points of comparison between the end of the Civil war and the recent unrest that swept the country on the heels of George Floyd’s murder.

“The stakes are a little different,” Neal said. “Many African-Africans, Black Americans, feels as though this is the first time in a long time that they have been heard in a way across the culture.”

The same hope that shaped the first Juneteenth feels singularly relevant to today.

And yet, it’s not just among Black folks—white people are, many for the very first time, expressing interest in the holiday and its significance.

Again, a lot of that has to do with the surge of protests and renewed calls for racial justice over the last summer. Many admittedly ignorant people were earnestly inspired by the Black Lives Matter movement to learn more about Black culture and history (remember when anti-racism books were flying off Amazon’s bookshelves?!).

As people became more aware of the holiday and its significance, political leaders and corporations began to get in on the act. 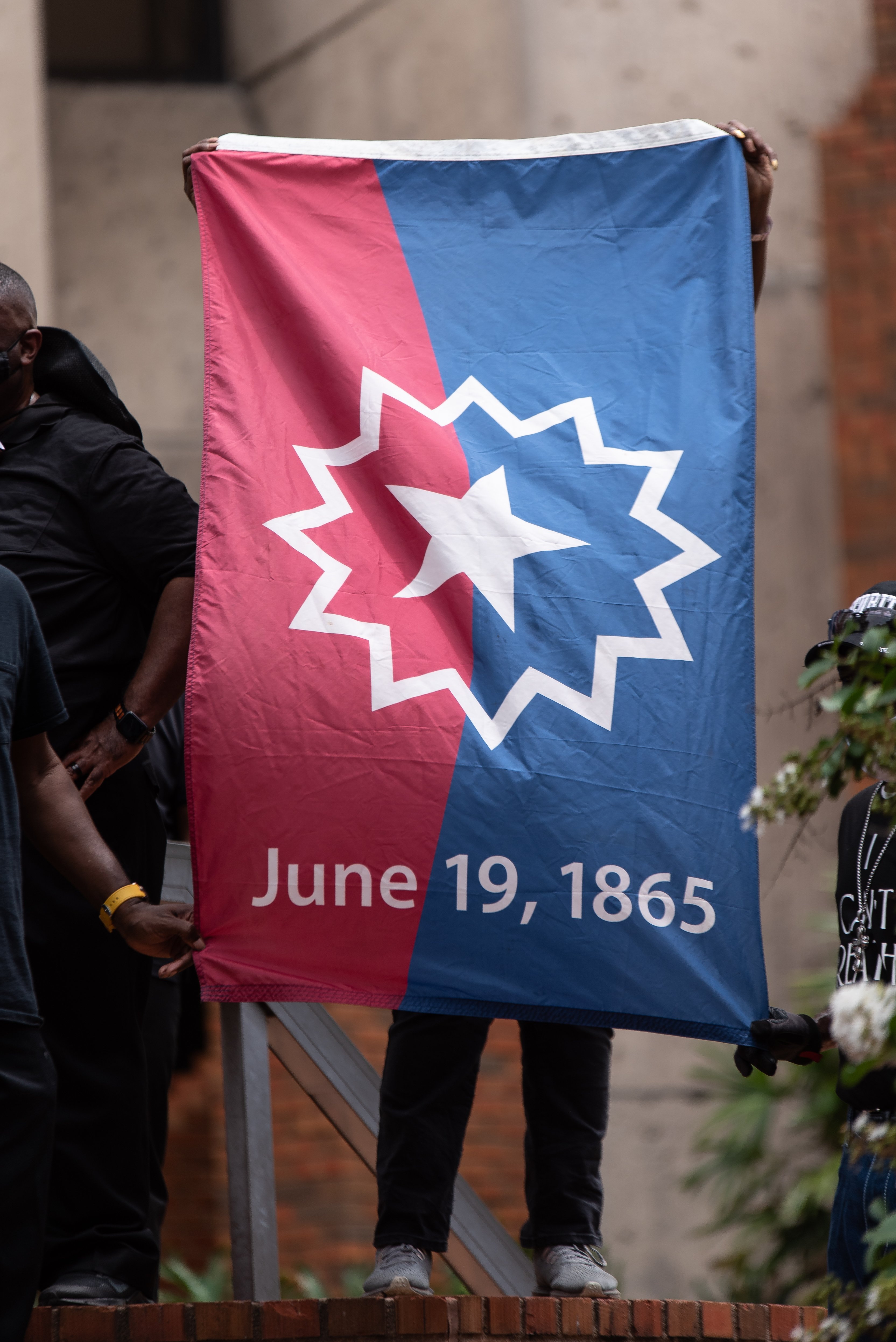 A cynic might note that many of these same leaders and corporations actively and regularly jeopardize the lives and livelihood of Black Americans. That same cynic might note that the holiday is as nonconfrontational as it gets, celebrating a day Black people were GIVEN their freedom, not one where they righteously sought to take it, and thus is more palatable for conservative tastes.

Regardless, some combination of popular support and corporate calculus surely led businesses to begin to recognize the holiday. Indeed, leading companies from varying industries began last year, giving their employees the day off and also wishing their followers a happy Juneteenth on social media.

Whether this is toothless virtue signaling, an earnest desire to do right, a carefully crafted business decision, or (in some cases) stone cold hypocrisy, the fact remains that over the last year, companies like Twitter, Best Buy, Nike, and Target all recognized Juneteenth, as did the NFL.

A Detour to the NFL: Words, Actions, and Responding to the Clapback

The NFL brings up an interesting point about the consistency of messaging. As corporations line up this year to wish people a happy Juneteenth, they should take some of the lessons the NFL learned last year to heart.

The league famously blackballed Colin Kaepernick for his non-violent protest against police violence, taking an aggressively conservative stance on the issue that has been hard for them to shake ever since. 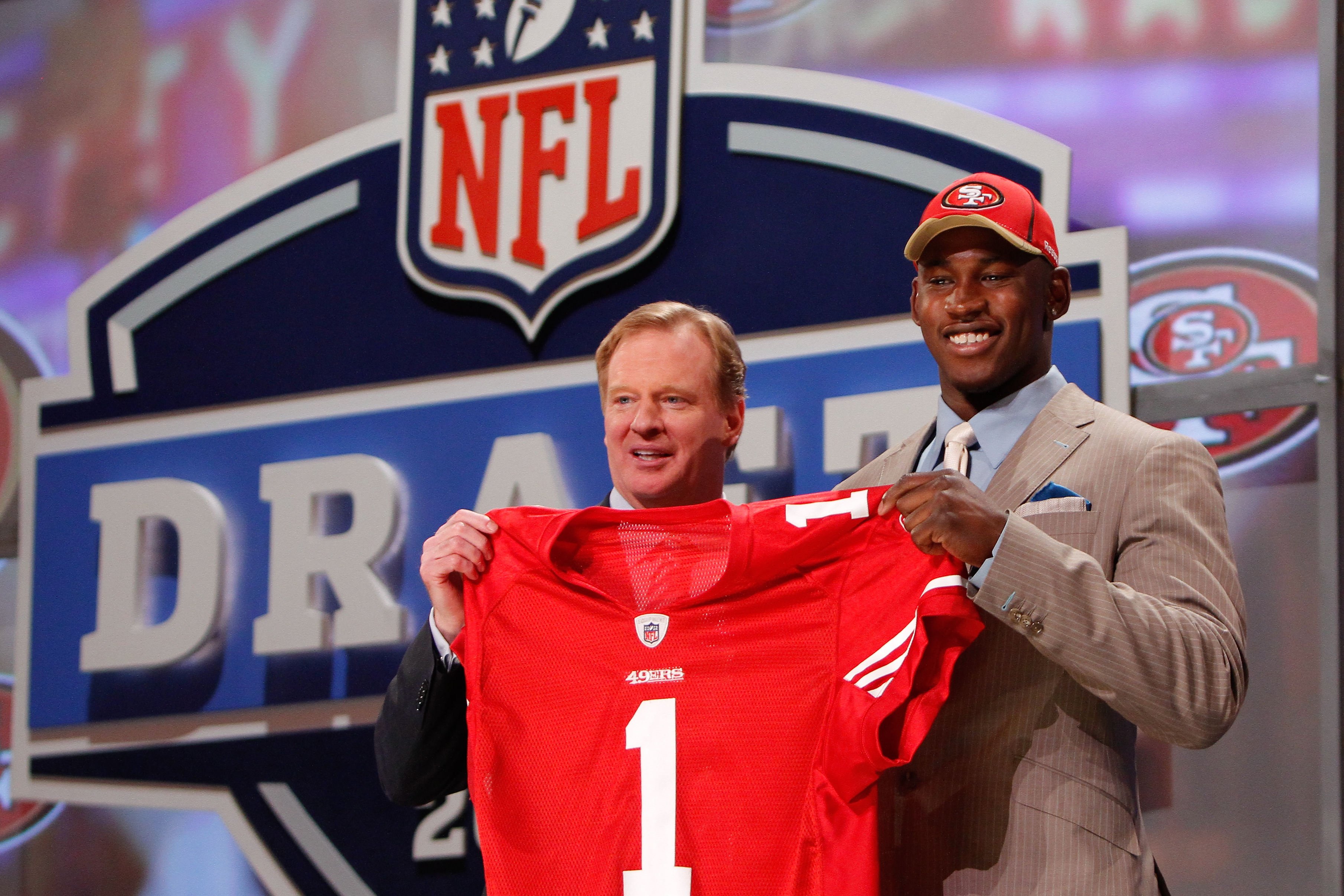 As the NFL began voicing support for the 2020 protests against police violence in the days before Juneteenth, NFL players were quick to note the asymmetry of a league that champions black causes and cultural events on social media, but punishes efforts to advance those causes.

So it was that, at the height of lockdown, some of the most famous active members of the National Football League produced a minute-long video calling out the NFL for its silence surrounding police violence, and demanding that the league “admit wrong for silencing players from peacefully protesting.”

The league had self-righteously opposed anti-police violence protests before they swept the nation and gained more cultural momentum and currency and, until it accounted for this hypocrisy, any statements they made about valuing Black lives and voices rang hollow.

Whether due to a prudent recognition of shifting cultural and market trends, or a better-late-than-never decision to actually do what’s right, the NFL quickly reversed course and responded to the players’ video.

Within one day, NFL Commissioner Roger Goodell produced a one-minute video response (seemingly from his basement or a bomb shelter), in which he acknowledged the NFL was wrong for silencing its players.

The response was quick and complete. And it was entirely necessary; the likely result of a rapid and cogent analysis.

Because Goodell’s video and the league’s support for the Black Lives Matter may have alienated some of the NFL’s conservative and racist fans, it is a risk they absolutely had to take. The league needs its players to play its games, and it needs its most popular stars to be the face of their league. 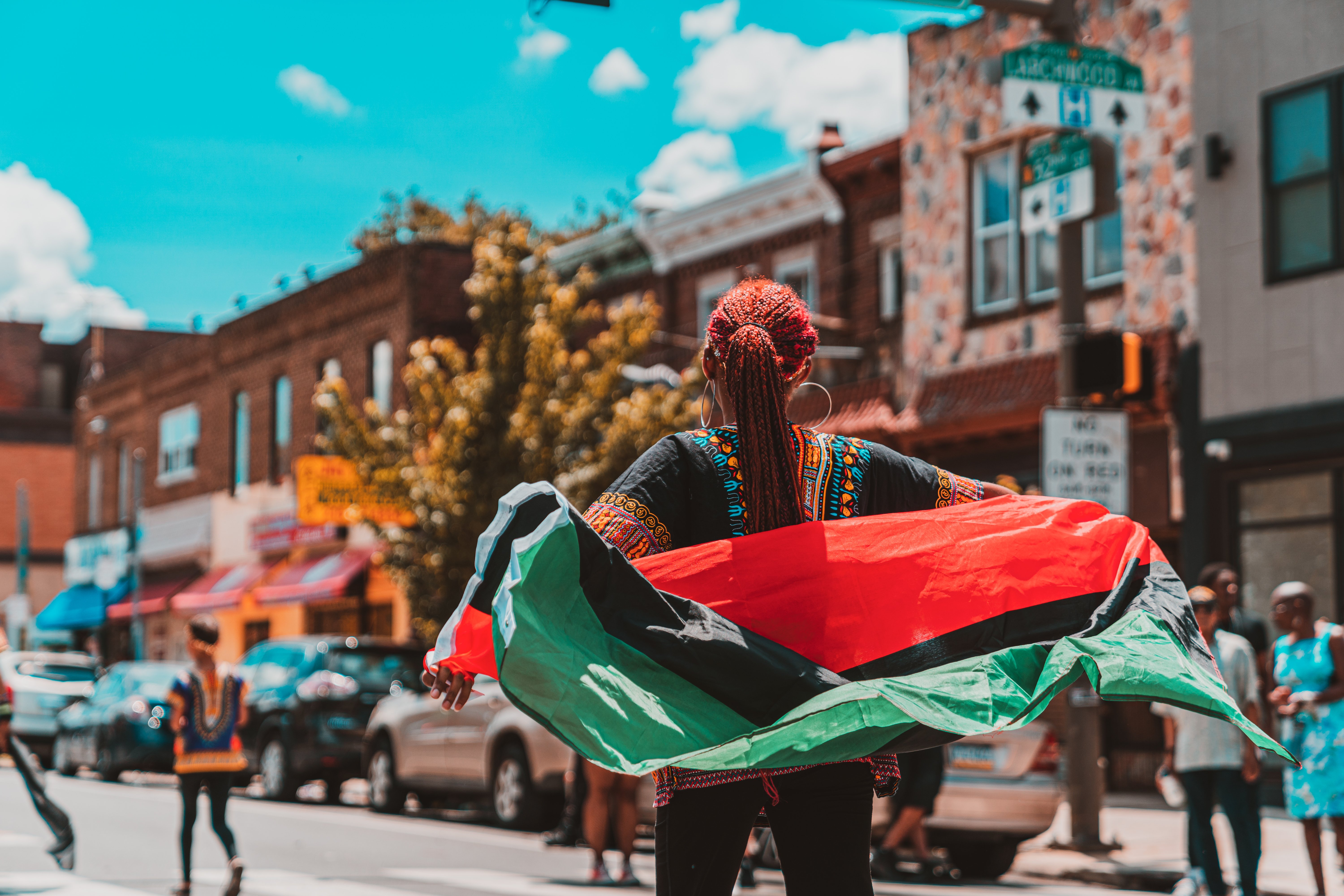 When the leagues’ biggest stars (including Patrick Mahomes, Odell Beckham Jr., Ezekiel Elliot, and DeAndre Hopkins) conspire to produce an unsanctioned video publicly calling out their employer and seemingly threatening an insurrection, it’s time to act.

And act the NFL did. We will be curious to see what message the NFL posts on Saturday, and how that message is received.

The years after the first Juneteenth were filled with potential and, for a short time, seemed to capitalize on that potential. But White backlash was swift. Within a decade, former Confederate states began a systematic effort to resubjugate Black Americans through political disenfranchisement, racial terror, and labor exploitation.

And we need not look too closely at current events to see its historical rhymes. Last summer, just as it felt like Black people were finally making headway in popular politics and culture, the backlash began. Then, when people didn’t like the election results, it got worse.

Today, states are passing restrictive voting laws to once again disenfranchise Black Americans. White violence--exercised by the state, private individuals, and public groups--continues to threaten Black Americans with horrific consequences. And in the most recent wave of anti-Black legislation, states are passing restrictions against teaching this history. 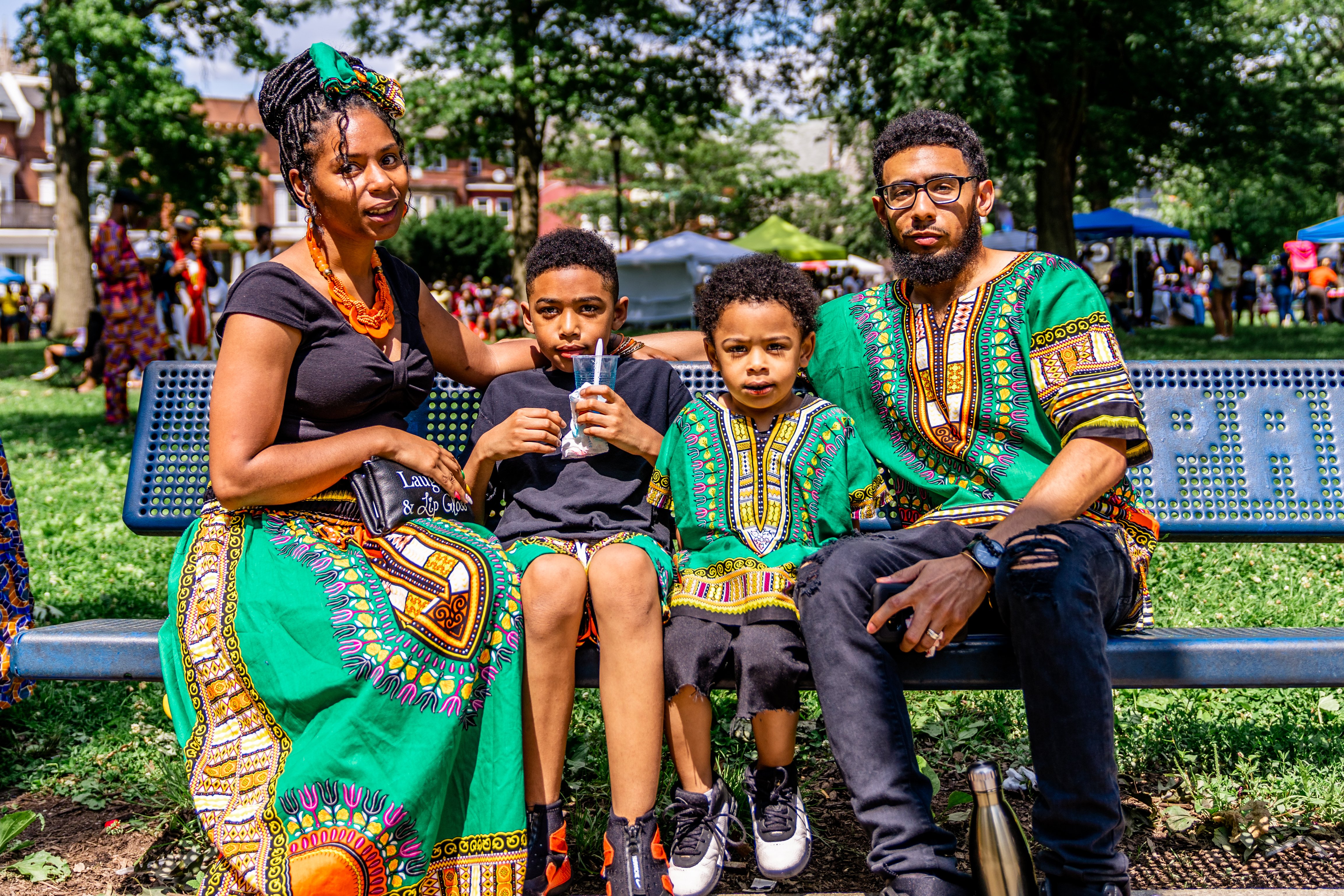 So, yes, that is history’s rhyme that you hear.

But, hopefully, things will be different this time around and companies’ support of anti-racist causes is not merely lip service. Because it’s easy to wish somebody a happy Juneteenth, but helping to ensure the next Juneteenth is an even bigger cause for celebration, that’s the actual work.

So our advice: Celebrate Juneteenth however you wish. But don’t do it in a way that doesn’t align with your actions the other 364 days of the year. Otherwise, you might find yourself making an apology video from your basement like Roger Goodell.