Can Reserve Save Starbucks? What the Food Service Market Research Has to Say

Things have been rocky for Starbucks as of late. The two-tailed mermaid has seen its stock drop 14% this year and missed projections for five straight quarters before recently turning it around, and CEO Kevin Johnson is unhappy, calling the year-to-date “not acceptable.” Financial analysts are in a tizzy, wondering if it is time to turn their back on the coffee giant—as Yahoo so succinctly put it, “is it finally time to sell?”

Of course, this isn’t anywhere near a life-threatening situation for the coffee giant, and with two tricks still up its sleeve, we have faith they will turn it around. So, put a pot of cold brew in the fridge (totally cuts down on the acid) and follow the food service market research to understand how Starbucks got so underwater, to assess their roadmap back to the surface, and to see just how many Little Mermaid references we can sneak in (Daddy, I love him!).

So, what happened to the ubiquitous caffeine pusher? A few things really.

First, there is product fatigue. Look, Frappuccinos aren’t what they used to be—it seems the Unicorn Frappuccino was appropriately named as it was the rare, nearly mythical recent rollout success for the flagging product. Did you know they tried to make a “crystal ball” Frappuccino a thing recently? Yeah, us neither. 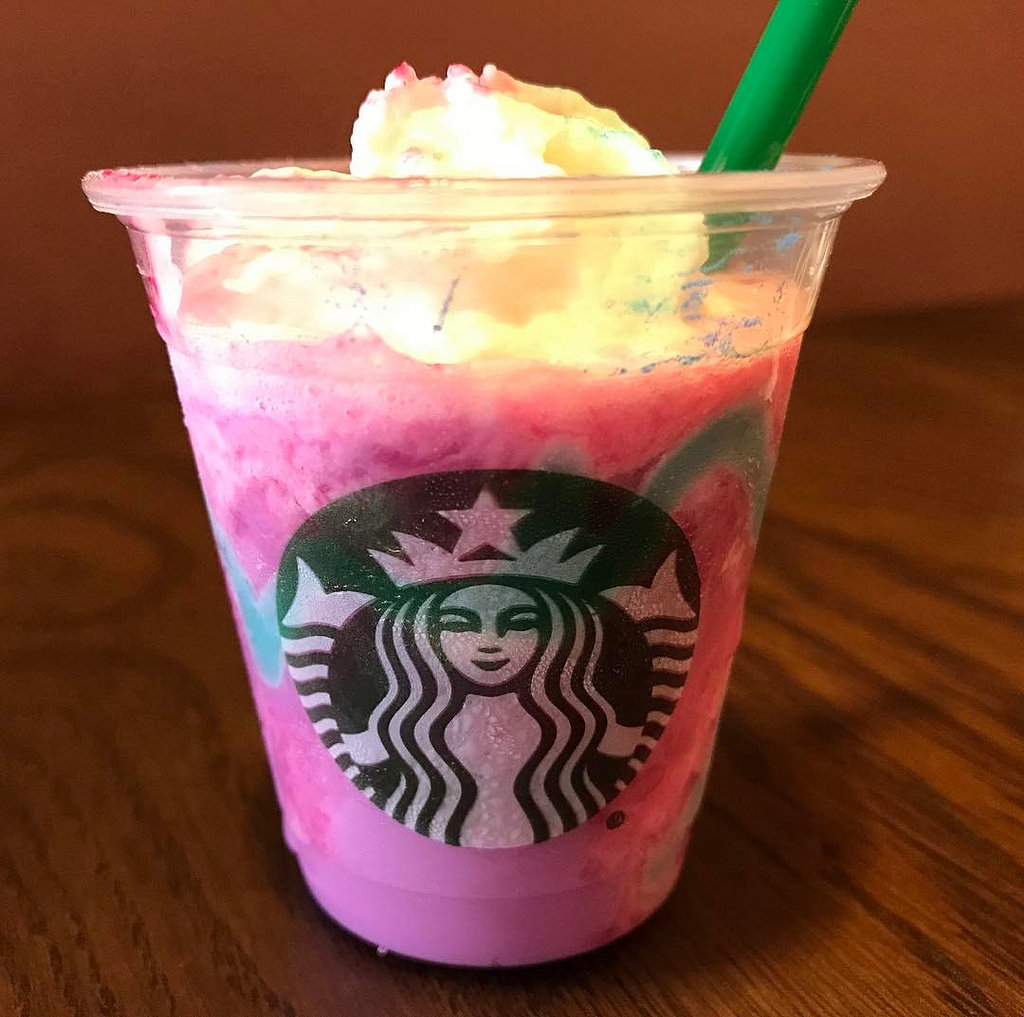 In 2015, Frappuccinos accounted for 15% of all Starbucks’ sales, but that has since dropped to 11%. Doesn’t seem like a lot, but it is indicative of a larger problem. The decadent, dairy-rich product seems out of place with today’s healthier-on-the-go consumer, which explains why team green is increasingly emphasizing their Refreshers line, which pack less sugar and caffeine.

At least that’s CEO Kevin Johnson’s theory: "What we're seeing is...consumers shifting to healthier beverage choices, better-for-you beverages. We see that in our Teavana Shaken Iced Teas and we see that in our refreshment portfolio.”

But it’s possible the trouble runs a bit deeper. If consumers were shunning fatty foods and drinks writ large, how to explain the meteoric rise of Shake Shack and other all-in fast food joints, or even the Unicorn Frappuccino’s recent success. It can’t just be the calorie counters.

Indeed, what should frighten Starbucks isn’t a trend towards healthier products, but an exhausted consumer base no longer interested in their seemingly stale drinks.

They used to be on the forefront of product innovation, arriving to the pumpkin spice party well before consumers even knew they wanted pie-flavored coffee drinks, and they were early innovators in matcha, almond milk, and even cold brew. That’s why one analyst noted: "Certainly consumers shifting away from sugary drinks can impact [Starbucks'] menu and business, but I think that's a secondary or tertiary issue for them," Henkes said.

Too Many Fish in the Sea: Starbucks Saturation

So, it would seem that their Frappuccino problems cannot be explained away by sugar and saturated fat.

There is also their actual physical saturation problem: they have too many locations. We all know this is true. It is seemingly impossible to walk from here to there without tripping over at least three Starbucks. They are in grocery stores, airports, darn near every city street corner…and that’s just in the United States. This humble blogger just returned from a Mexico City sojourn and can report first-hand that our southern neighbor (lindo y querido) is just as saturated.

There are over 15,000 Starbucks in the US alone, and it is thus not surprising that Starbucks plans to shutter 150 corporate locations this year and will be slowing down licensing to reduce its US footprint.

Of course, there are other factors at play here too—Starbucks delayed its early Spring marketing campaign after that unfortunate (very, very unfortunate) Philadelphia incident, and also are having difficulties with Chinese delivery operations. So yeah, it’s been a poor, unfortunate year or so.

But let’s not crash too hard here. It wasn’t too long ago we were looking for Ronald-McDonald-sized coffins, and like McDonald’s, there are reasons to believe Starbuck still has a few siren songs in her to lure consumers to the counter.

First, their digital game is second-to-none and only getting better.  They have over 15 million members enrolled in their My Starbucks Rewards program, and their online ordering and payment system gets raves from critics and consumers, to say nothing of the efficiency it brings to in-store operations. Consider how much cumulative time is wasted in each store every day as consumers um, huh, and I dunno their way through the menu and then fumble their way through the payment system (do I swipe or insert?!). Getting drinks ordered up and the store paid out before the consumer even arrives increases capacity and lowers overhead.

And keep in mind that roughly 60% of consumers are not even enrolled in their digital programs. Starbucks is working on this, getting over 5 million email addresses over the last several months, and tying those addresses to order history. Big Data might be a dirty word in Europe and California these days, but consumers’ unique user profiles allow the Big Green to personalize offers based on order history and frequency, and also create a local neighborhood feel by tailoring it to their most frequently-visited sites (more on the neighborhood thing in a second).

So they are building more digital relationships while also making those relationships more individuated. This, they hope, will drive sales consumer excitement, and ultimately sales.

Reserve Wants to be Part of Your World 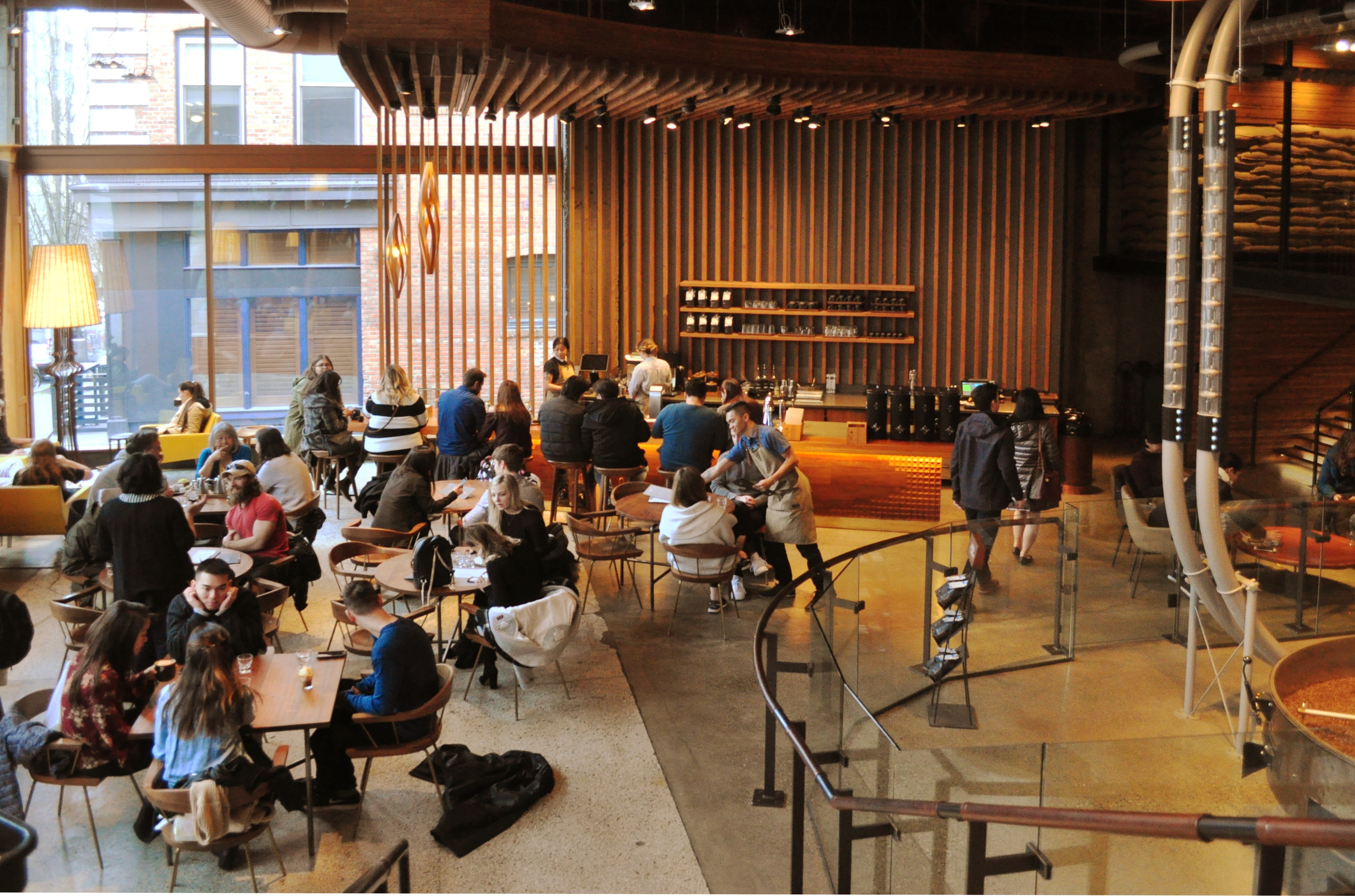 And then there is the Reserve concept, Starbuck’s entrance into today’s space race (total BSG reference) of third-wave coffee. Our faithful readers will recall the two-pronged concept—which includes both Reserve Stores and Reserve Bars—was introduced by former CEO (and noted shoulder duster) Howard Schultz as their elevated brand, selling fresher food and pricier brews.

Their publicity photos give us an idea of their target: moneyed millennial hipsters. Blue-haired professionals, lumberjack-looking leisurers, and all ascendant twenty-thirty-somethings in-between have their seats reserved at Starbucks newest brand, open in Seattle and soon to be in New York.

These new locations are all part of Starbucks’ “third-place” aspirations, their desire to become the place people gather (and continuously spend their green) between work and home. Thus, the leather sofas, the fireplaces, the original art, and the expansive coffee, food, and even booze bars.

According to Schultz, "Providing the world with a warm and welcoming third place may just be our most important role and responsibility, today and always."  Yes, it’s somewhat haughty and perhaps too precious by half, but it is a foundational cornerstone of their future ambitions and makes good sense.

Think about how little time you generally spend in a Starbucks as opposed to a local coffee shop. Starbucks is closer to Dunkin' Donuts than to that joint down the street from you where you went on a whole bunch of first dates and knocked out that midterm senior year.

According to their press release timed for the first (and currently only) Reserve Store location in Seattle, the concept is to build, ”a place where Starbucks partners and visitors can relax in a leather lounge chair near the fireplace, nosh on a piece of focaccia at the counter or enjoy the latest Reserve espresso and a flaky cornetti from [famed in-house baker] Princi.”

The Reserve Bars are the micro version of the Reserve Store, inserted into existing Starbucks locations. These have already rolled out in dozens of trendy locations and Starbucks plans to add to thousands over the next few years. Once consumers get a taste for their good stuff, Starbucks hopes and prays, they will choose it over lower-margin items at their local shops.

They are putting a lot of coffee beans into this basket and have already announced an uncharacteristically slow rollout with only six expected to open in the near future. Sounds like somebody is taking it slow and putting in the market research.

Let’s hope they are doing it right. As we’ve said before and we will say again (and say really quickly like the micro machine man when we are hopped up on caffeine):  There simply is no substitute for boots-on-the-ground. Starbucks is hopefully running customer intercepts at their one-and-only Reserve Store, learning lessons in real time to apply to the future.

They and their investors hope, of course, the Reserve concept will not prove to be their White Whale.