The logic behind this is not difficult to decode—these employees, most notably their union benefits, were far more expensive and came with greater protections. By partnering with Instacart, which relies on Independent Contractor labor, Albertsons is reducing its delivery costs to remain competitive with established operations like Amazon.

"Albertsons Companies made the strategic decision to discontinue using our own home delivery fleet of trucks in select locations, including Southern California, beginning February 27, 2021," an Albertsons spokesperson confirmed. "We will transition that portion of our eCommerce operations to third-party logistics providers who specialize in that service.”

On its own, this move would already be newsworthy as it speaks to the reshaping of the grocery delivery market in the wake of a pandemic that has driven many consumers’ grocery spend online. But there is more at play here: California, the nexus of Albertsons’ recent shift, recently passed Proposition 22, which allows transportation and delivery companies to continue classifying employees as independent contractors. In that context, this move has vast implications as it speaks to the ways in which grocers are reorganizing labor and logistics to rapidly develop omnichannel operations against a broader backdrop of labor laws and an expected minimum wage hike.

So we are putting in the grocery industry market research to place this shift in its Proposition 22 context as well as explore its future implications. 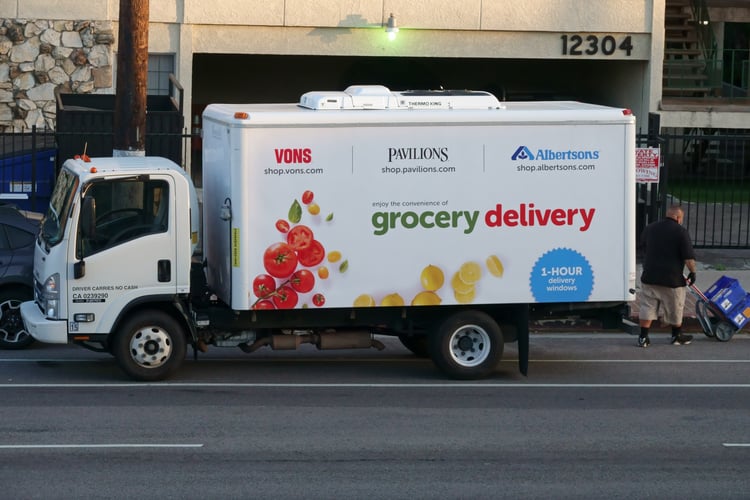 Proposition 22, which voters passed by nearly a 20-point margin, allowed transportation companies to continue classifying their workers as Independent Contractors—as opposed to employees—who are not entitled to unemployment benefits, disability, or social security, much less a reliable work schedule. For ride share companies like Lyft and Uber, food delivery companies like Door Dash, and grocery delivery companies like Instacart, this represented a significant victory and return on their combined $200 million in political contributions

Indeed, they hope that California becomes a precedent as they look to secure similar laws in other jurisdictions, protecting the long-term viability of their business model, which relies on Independent Contractors.

While Albertsons maintains that Proposition 22 did not bear on their recent labor decisions, for many observers, the timing is just too coincidental. Whether or not it is true, it appears that Albertsons jettisoned its workforce once California voters gave them the green light.

As Albertsons transfers its delivery operations from its own employees to Instacart’s third-party contractors, Instacart is undergoing its own transformation. They announced last week they will lay off 1,877 employees who picked and packed groceries for pickup by Independent Contractors. Classified as employees, these in-store workers were entitled to benefits Independent Contractors are not, and Instacart, on the heels of Prop 22, is attempting to rebalance its ratio of employees to contractors.

Stated simply, they want more contractors and less employees, and will now exclusively use Independent Contractors in its pick and pack operations. This isn’t just about the relatively lower cost of employing Independent Contractors, it’s also about their flexibility. Companies can deploy contractors wherever they are needed, whenever they are needed. They can offer them hours as they become available, move them from store to store as necessary, and can expand or decrease their workforce on a whim without dealing with any labor law headaches, severance benefits, or any other common employee protections.

Expectedly, labor unions are not thrilled about what this means for workers, much less for their ever-shrinking membership rolls.

“Instacart firing the only unionized workers at the company and destroying the jobs of nearly 2,000 dedicated frontline workers in the middle of this public health crisis, is simply wrong,” UFCW International President Marc Perrone said in a statement.

The Price of Admission to Amazon’s World

For many, Proposition 22 and the labor reorganization it allows for is yet another example of capitalism’s disregard for the humans existing within it, of the wealthy finding ways to make more money at the expense of workers.

“Every employer in the state of California is looking at this and drooling over this,” United Food and Commercial Workers Local Chief Todd Walters recently told KPBS. “The companies are not paying unemployment, disability, social security ... they’re not paying the taxes. The independent contractor pays for that.”

Walters said this would only exacerbate a growing unemployment crisis.

“You look right now how much we depend on unemployment and state disability because of COVID, imagine the more companies that go independent contractors, those social networks are going to get hit really hard.”

While we do not disagree with any of Walters’s points in particular, we would be remiss if we did not note that—in a market Amazon threatens to dominate—this is the cost of competition. This isn’t just a bunch of rich plutocrats twirling their mustaches, rolling cigarettes out of $100 bills, and scheming up ways to cheat workers (though there is some of that). Instead, it is about keeping delivery costs as low as possible in order to remain competitive in an expanding and rapidly streamlining market.

Indeed, law professor Orly Lobel noted, “It’s clearly a monetary incentive. In the end, all of these corporations are acting out of bottom-line cost-cutting. And what’s happening is Albertsons has decided that a deal with a (third-party) will be more efficient in terms of their liabilities and cost of delivery.”

It is easy to understand the frustration and fear workers are experiencing right now. This should never be minimized—we are here to discuss market research, but the daily lived realities of individuals struggling to make ends meet is truly heart breaking. As one Albertsons worker who recently lost his job observed, “The grocery stores are making so much money right now. What are they complaining about?”

But the truth is that consumers are extremely price conscious and are constantly looking for the most affordable grocery delivery options. In competing against providers like Amazon and Instacart who rely on contract labor, Albertsons must do what it can to keep its delivery costs low. They can build in differentiators like Albertsons’ recently announced cold box pickup system, but the majority of customers are unlikely to willingly pay premiums for staple products. 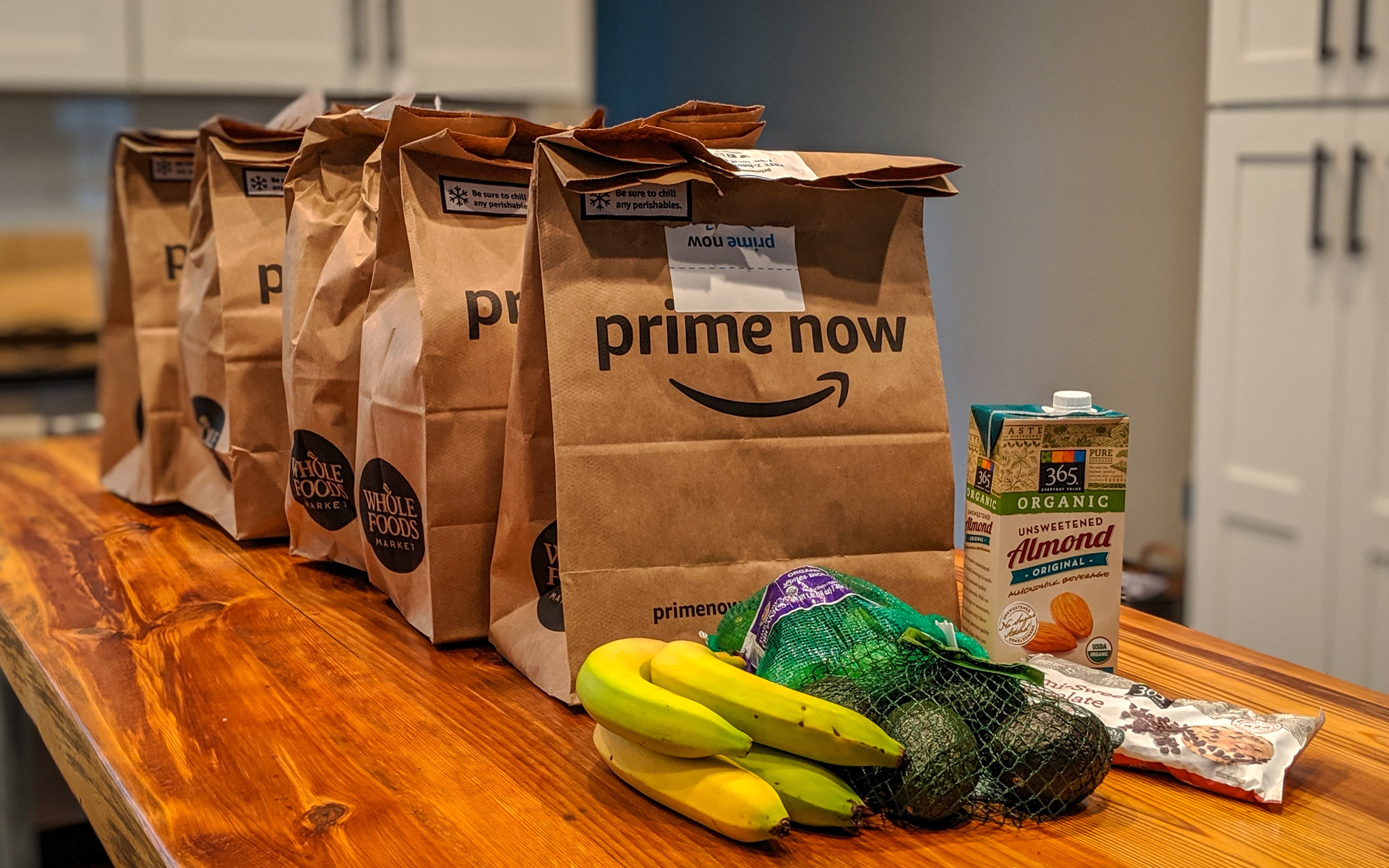 In order to remain viable in an increasingly omnichannel and digital market, Albertsons must make calculated decisions about its cost of labor and its delivery operations writ large. Grocery industry market research must shape these decisions, and they must also turn to marketing and advertising market research to communicate the shifts in ways that do not appear anti-labor.

We’ve written a lot about the gig economy over the years and always find ourselves drawing the same conclusion: Right now, it is about market share not profits. The vast majority of transportation and delivery companies have yet to achieve sustained profitability. But it will not always be like this—though it may seem far off, the era of self-driving cars, drones, and robot pickers will soon be upon us, and it will provide a path to profitability.

When that day comes, companies want to already have a commanding portion of the market, established relationships with customers, and a streamlined internal infrastructure. The moves we see companies like Albertsons making are about staying competitive today by keeping themselves in customers minds when they decide to order grocery delivery. If they don’t, they will face an insurmountable challenge trying to crack into a delivery market already dominated by companies like Amazon and Walmart.

Avoiding that future requires difficult decisions as well as some help, which they got from California Proposition 22.