Yeah, I guess we have to talk about Popeye’s chicken sandwich now.

You don’t need me to tell you how popular it is, it’s one of those inescapable facts like how even if you don’t watch football you know the Patriots are dominant. At its peak, each Popeye’s location sells roughly 1,000 chicken sandwiches a day, accounting for more than 30% of their product sales. By the end of August, less than a month into its run, they had run out of chicken (they thought they had enough for another month!) and put the sandwich on hiatus; it returned earlier this month and, well, you know the rest.

As one industry analyst noted: “The U.S. fast food category is characterized by its low-single-digit SSS growth rate. As such, for a mid-size chain like Popeye’s to more than double its market share over a period of several days last month likely means that larger fast food players including McDonald’s, Burger King, and Wendy’s are likely to feel its impact.”

And now, demand has started to damn us as customers and employees have become violent.

So, how did we get here, how did that sandwich become so darn popular? Well, get that chicken soaking in buttermilk and heat up the oil, we are dropping a fresh basket of food service market research to understand how this sandwich became so popular, what is says about social media politics and practices, and how race and sexual identity are figuring into this phenomenon. Hope you like it as spicy as you do crispy cuz your humble blogger is coming in hot for this one. 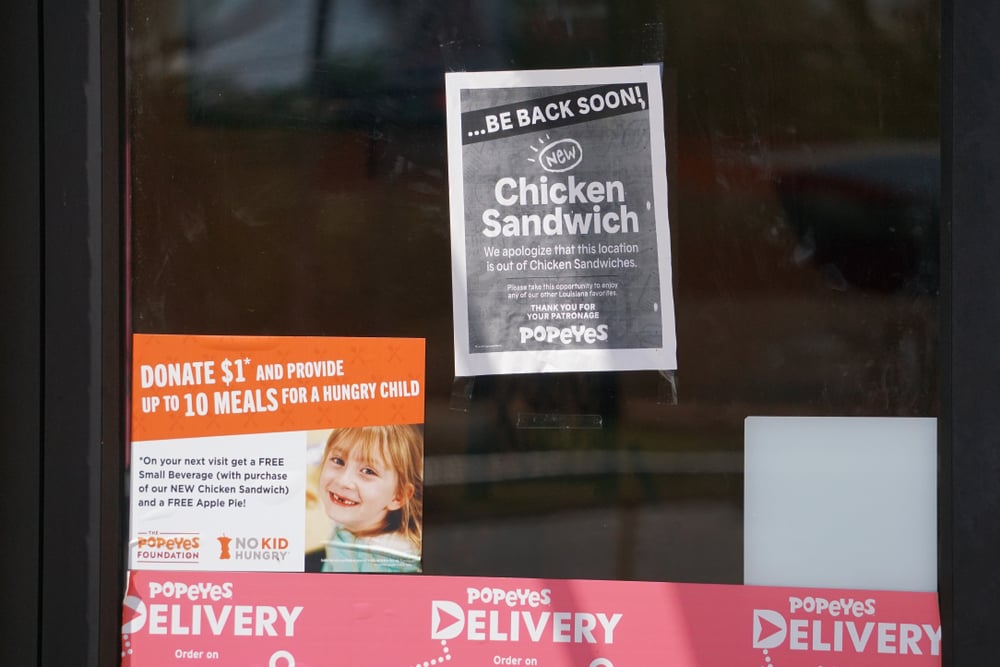 Some Peaceful Words About Violence

On the surface, the sandwich’s sensational sky-rocketing popularity is nothing new: it is a cronut on steroids, a deep-fried pumpkin spice latte. But it’s not quite the same, is it? Demand is one thing--we are no stranger to fad demand. Yet the way this fad went from fun to ferocious is something your humble blogger hasn’t seen since parents were brawling over Cabbage Patch Kids in toy store parking lots.

Seriously, we started researching this blog last week and it has truly been difficult to keep up with the insanity. No doubt between now and when this blog publishes, some other sad incident will occur in a Popeye’s dine-in line or parking lot. From shootings and stabbings to brawls and car crashes, the chicken craze carnage continues as consumers consume their last ounces of human dignity. Head here if you need a rundown of our national shame.

Two important things to consider: 1) people far smarter than me have already started to note how the phenomenon itself, and conversations and coverage of its attendant violence,  have been shaped by racial perspectives, biases, and assumptions. That is a discussion for a different time and place, but something to keep in mind. And 2) Even though Popeye’s loves having the type of product people will fight over, nobody (nobody!) wants somebody getting killed over a chicken sandwich. This is not something to be glib about.

So, how did this all start? The way we see it, there are three independent forces working together to make this sandwich so popular: 1) The top-notch sandwich, and the social media team supporting it, are killing it;  2) Black Twitter, which often leads national cultural trends, loves it, and 3) The national sandwich vacuum created by Chick-fil-A’s politics and the lack of a quality competitor is ready for it.

Ok, so the first part is really easy to explain: this is, quite indisputably, a good chicken sandwich at a reasonable price point.

Don’t believe me? Well, don’t take my word for it: go ahead, ask the critics. The batter is thick and as crispy as a giant pile of fallen autumn leaves. Crunch.  Compared to Chick-fil-A, the pickles are thicker, the chicken is crispier, and the bun is butterier.

Of course, having a superior product doesn’t guarantee it will be popular (oh, Firefly, I still mourn you!). So how did we go from subtle word of mouth to people being punched in the mouth? Social Media, that’s how. 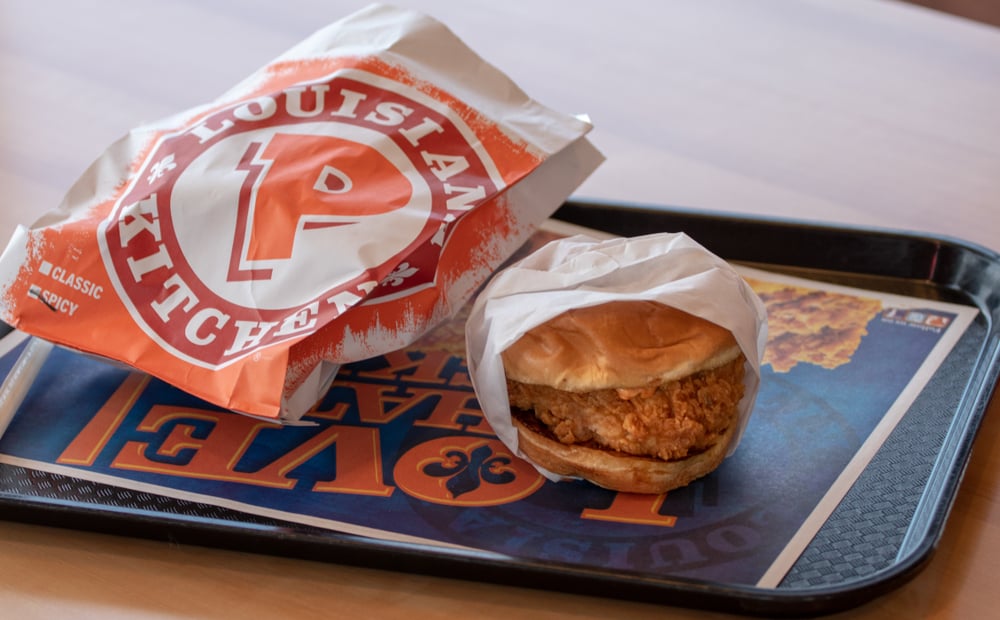 Let’s not forget, this sandwich launched on 8/12/19, and did not immediately move the needle all that much. It took a whole week of proselytizing and one very poorly considered Chick-fil-A tweet before it became a sensation.

And that owes to a groundswell of social media love, particularly among Black people on Twitter (yes, it is ok to call it Black Twitter, no it’s not ok to tread into ugly stereotypes about culinary preferences). Curiosity about and support for the sandwich steadily increased as people started posting pictures of them and their sandwiches, a new signifier of social cache in a curious social media age. Some said it was better than their Aunt’s (high praise indeed), some that it could have only been divine inspiration that created this sandwich (higher). It became a measure of wit to find new ways to exalt is virtues, and as always, Black Twitter was up to the challenge.

That slowly-mounting popularity in the first week was enough to cause Chick-fil-A to commit an unforced Twitter error. Their uninspired (and uninspiring) tweet went like this: “Bun + Chicken + Pickles = all the [heart emoji] for the original.” Yeah, not many high fives going around in that marketing department.

The Popeye’s social media team replied, simply, “Y’all good?” We will get back to this a little later, but that tweet makes our marketing and advertising market research heart soar. Regardless, that’s the tweet that launched a craze that may threaten to cause a chicken shortage if it doesn’t slow down. One publication estimates that Popeye’s generated $65 million in marketing value from August’s social media surge alone.

The tweet was retweeted, covered extensively by publications ranging from mainstream news to food blogs and popular culture sites, and implicitly made this a Popeye v. Chick-fil-A conversation, much like Pepsi v. Coke, or Android v. iPhone. In doing so, they firmly asserted their comparatively young sandwich as a challenger for the best chicken sandwich championship belt. And, with popularity surging in all communities, it is a fight they think they can win.

Plain (and Playing) Politics With Chickens

And then there is the whole gay thing. Look, Chick-fil-A has a long history of anti-LGBTQ donations, statements, and actions that endear them to certain parts of the country while repulsing others. There have been school walkouts, civic battles, and mass protests against (and for) the Atlanta-based king of chicken. All of this suggests that certain sectors of the country were good and ready for a sandwich as good or better than Chick-fil-A’s that didn’t come with a heaping side of anti-gay politics.

And it seems they have. You would have to be a bird brain not to notice the timing of Chick-fil-A’s recent announcement that it would cease donations to anti-LGBTQ charities, which came just as Popeye’s started their sandwich’s second run. 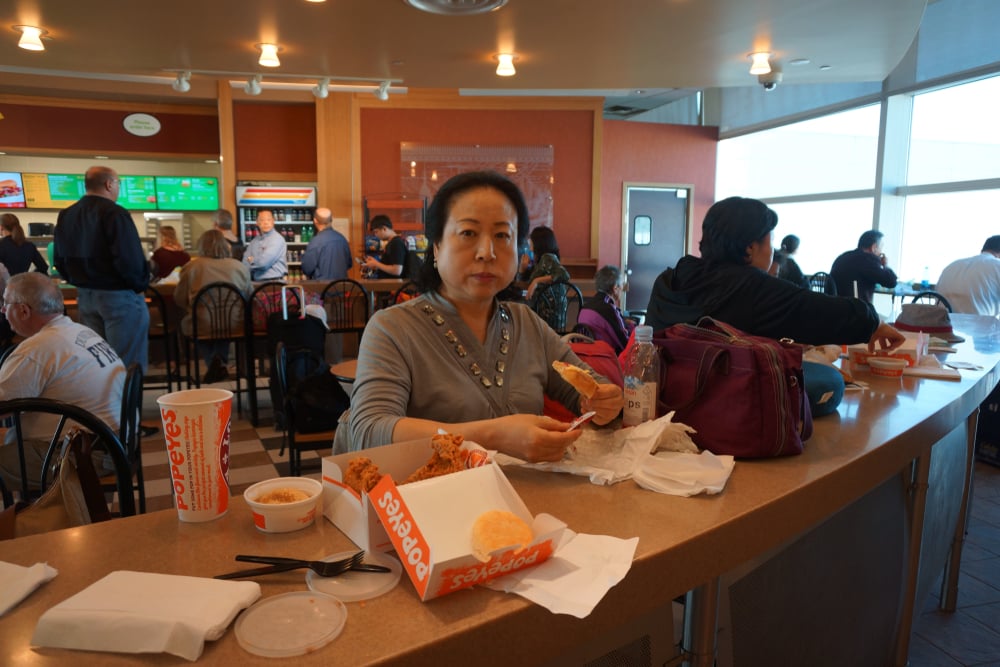 Your humble blogger’s personal life has never been a secret--I’ve shouted out my not so humble boyfriend in these pages many times. But I’ve also shared several Chick-fil-A sandwiches with him because, hey, the personal is political but everybody still gotta eat. Chicken sandwiches are good and the truth is Chick-fil-A’s was the best, so we ate them even if it ate at us a little. But now Popeye’s has given us options (well, not yet: we ain’t waiting in those lines!).

And don’t think that Popeye’s doesn’t know this, that they haven’t always known this. Take this quote from a Popeye’s marketing executive: “There’s buzz around our quality product; it’s delicious,” Brown said. “And then you add the known conservative and anti-LGBTQ ideals of our competitor. This is the formula that equals one insecurity-ridden tweet.”

That tweet again, right? Yeah. That’s the big lesson here. Market research is important in so many phases of product development and rollout that it is easy to forget how essential it can be to a social media team developing a thoughtful campaign. And that tweet from Chick-fil-A, it was not well thought out. Popeye’s response, however, was as crisp as their chicken.

And with that clap back, Twitter (particularly Black Twitter) erupted, a deluge of demand followed, and a simple sandwich went all the way from chicken little to mother hen.