Part 2 of our series on cannabis and the future of business. See Part 1 Here.

Constellation Brands, the beverage conglomerate with Corona as its crown jewel, recently made a play for what many believe will be the future of manufactured beverages: marijuana. The company purchased 9.9% of Canopy Growth Corporation, the world’s largest cannabis producer to “develop and market cannabis-based beverages.”  With recreational marijuana legalization becoming a reality in more and more states, and with the nation’s biggest marijuana market—California—going entirely legal, the investment seems perfectly timed to get a (rather large) foothold in the industry.

Indeed, CEO Rob Sands was candid about the move and its implied anticipation of national legalization: “We’re obviously trying to get the first-mover advantage.”

The CPG market research is quite clear on this one: the marijuana food and beverage industry is in a unique place, transforming from the Wild West of the black and gray market where anything goes, to a regulated playing field in which the some of the nation's (and world's) largest companies are already warming up. So, let's go through the marijuana-infused food and beverage market (which we will just call "edibles" from here on out), examining its growth potential and obstacles, while also appreciating a uniquely transformative moment in the industry.

Is it Really Scary or Am I Just Being Paranoid?

Right now, edibles seem like a no-brainer. That's why, according to Arcview Group CEO Troy Dayton, “There’s a brand boom going on right now, particularly in preparation for adult use legalization." Already, in the days before full marijuana legalization, Californians were eating it up, literally. Last year, $180 million worth of edibles were sold to medical patients in the state, accounting for 10% of all marijuana sales. With recreational legalization upon us, that number is expected to grow 25% annually.

Nonetheless, the market has two serious obstacles to overcome, one obvious, one not so much.

Obvious one first, marijuana is illegal in many states still, and despite the steady train of legalization, it remains difficult to expand operations as laws are determined state-by-state. This impacts manufacturing, research, distribution—everything. However, Sands and Constellation seem to think this state-by-state patchwork will, much like gay marriage, ultimately resolve itself in federal legalization. So perhaps time and cultural shifts will take care of that first problem, and Constellation wants to get in first.

Then we arrive at the second problem—one of reputation and potency. Edibles can, well, there's no delicate way to say this, get people way too high. Like, waaaaaaaaaaaay too high. High potency edibles have a reputation for sneaking up on the unsuspecting novice consumer, inducing paranoia and sometimes something bordering on the catatonic.

Among those with a higher tolerance, the concern is not as great, but for the first-time consumers this can be an alienating experience.  Just ask NYT columnist Maureen Dowd, who found out the hard way that a little pot tourism in Colorado can pack a serious punch.

Her experience is worth quoting at length:

"But then I felt a scary shudder go through my body and brain. I barely made it from the desk to the bed, where I lay curled up in a hallucinatory state for the next eight hours. I was thirsty but couldn’t move to get water. Or even turn off the lights. I was panting and paranoid, sure that when the room-service waiter knocked and I didn’t answer, he’d call the police and have me arrested for being unable to handle my candy…I strained to remember where I was or even what I was wearing, touching my green corduroy jeans and staring at the exposed-brick wall. As my paranoia deepened, I became convinced that I had died and no one was telling me.” 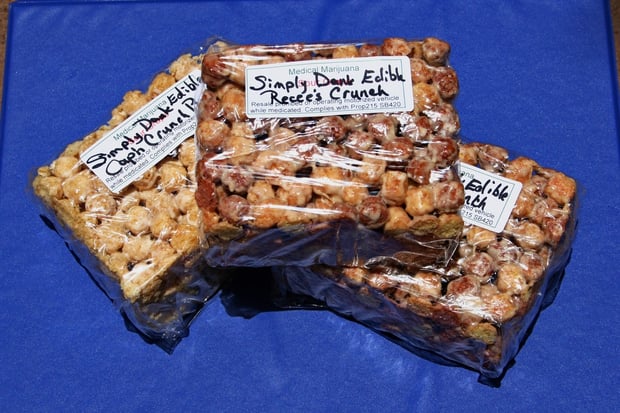 Sounds scary, right? These stories are not unique: just Google marijuana brownie overdose.  It seems that newbies’ eyes and stomach are oftentimes bigger than their tolerance.

Not one to be deterred, however, Dowd enlisted the help of none other than Willie Nelson, her “marijuana Miyagi”.  He guided her through the proper dosing levels, but obviously not every neophyte smoker will have their own ganja guru guiding them through the dos and don’ts of edibles.

Soon, the gurus may not be necessary as marijuana achieves the same level of dosing regulation as alcohol. Indeed, since the end of Prohibition, it has been relatively easy to control alcohol dosing. Ok, let's rephrase: it's been relatively easy to monitor alcohol dosing—the control part is on you. Regardless, every manufactured alcoholic beverage must indicate its percent alcohol by volume, and over time people have come to understand what those numbers mean to their own individual tolerance.

To this point, such precision has never been possible with cannabis because, obviously, as an outlawed narcotic, there were no regulation, testing, and labeling standards. And since scaring the wits and mobility out of your customers isn't a great way for manufacturers do business, the industry may be getting this under control.

First, there are new labeling and testing standards, meaning a customer should know exactly how much THC is in their product. State-licensed employees are always on-hand to provide dosing advice (though they can't make you or Maureen Dowd follow it), and forward-thinking manufacturers are already publishing their own dosing guidelines for all levels of experience.

Second, eating baked marijuana goods isn't just about getting super baked these days. The rise of low dose edibles over the last year has opened up the edible market to a whole new type of customer—one who doesn't want the escapist euphoria some associate with being stoned, but rather just a little hint of relaxation to take the edge off, and a little hit of inspiration to get the creative juices flowing. We are not talking about people getting red-eye, fridge-door-open stoned. Some are business professionals who find a low dose of THC in the morning takes away their caffeine jitters, and gives them a lift through their work day; others, stay at home parents who want to relax at home after the kids go to bed but don't want to get baked out of their minds.

What the Market Research Says: A Giant Pool with Some Enormous Sharks

Frankly, we see a serious opportunity for long-term growth in this particular CPG segment. In the same way that caffeine has become a background substance for most Americans, low-dose THC may overtime achieve a similar normalization and regularity. Also, consider the same potential for medium-to-low potency, cannabis-infused beverages, as well as designer, high-end cannabis products. Constellation's CEO already sees such normalization potential: “If a consumer is going to choose a can of beer, a glass of wine, a shot of liquor, or a weed laced-elixir, I want to be able to offer them all four.”

So the edibles industry will expand. We won't get into it here, but there are five different intoxicating compounds that can be extracted from marijuana, each with its own effect. As edibles and elixirs expand into niche diets and dosing preferences, the consumer base will grow, but not forever because, obviously there is only so much market share to capture. And with the Constellation investment, it's shrinking already.

Though marijuana manufacturing has been the province of small-scale operators, the big boys are warming up, getting ready to take the field. Thus, Beacon securities analyst Vahan Ajamian sees Constellation's investment as the proverbial opening salvo of a forthcoming battle: “We view this international investment as a game-changer for the sector, one that validates our thesis that Big Alcohol, Big Pharma and Big Tobacco are going to look to acquire leading companies in the sector.”

They're probably running focus groups and panel surveys right now, seeing how exactly to position these products within their brand identity in order to ensure they do not alienate their customers but instead provide them the options they desire. Fortune favors the bold, no doubt, but even the bold must test the waters with some market research.